Canadian Grand Prix 2014: Red Bull's Daniel Ricciardo admits that his victory in Montreal still has not sunk in 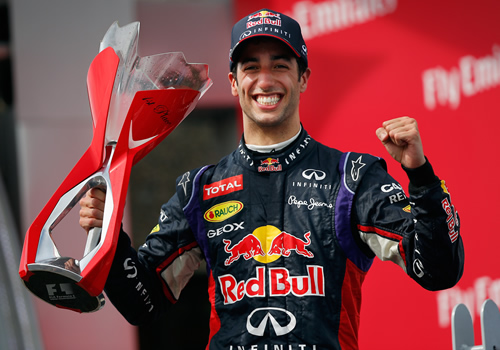 The 24-year-old Australian, who joined Red Bull after two years with feeder team Toro Rosso, overtook Mercedes’ Nico Rosberg for the lead with two laps to go to win a thrilling race in Montreal.

“I think it still seems a bit surreal to be honest, just because it all happened so quickly at the end,” said Ricciardo.

“I was third for a while and then it all happened in a really exciting fashion.

“Once I got past Segio Perez I knew I just had to drive clean and get in Rosberg’s DRS zone and, from then on, it was just awesome.

It still seems a bit surreal to be honest

“Finishing under the safety car made it a bit weird, but I wanted to make sure the two drivers who were in the accident were OK before I started celebrating.

“We achieved a great result today with first and third – so let’s enjoy it – but we will still have some work to do also.

“This will motivate the guys to work even harder and find even more, so I’m sure it will keep coming even better for us at the next few races.”