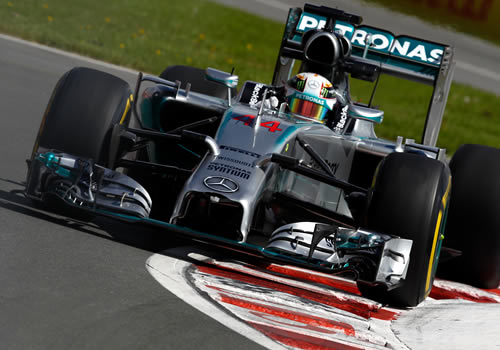 Hamilton was 0.175s quicker than the German after Ferrari’s Fernando Alonso had topped first practice in Montreal.

It was really good but we’ve got improvements to make

Red Bull’s defending world champion Sebastian Vettel was third fastest in the second session and was within half a second of the leading Mercedes.

“It was really good but we’ve got improvements to make,” Hamilton said.

“I think for everyone – whatever their package is – we all put the car on the edge.

“From set-up there’s a bit more to come tomorrow, but the Ferrari’s look quite close, I hope that that’s the truth and I hope the Red Bull’s are close as well.”

It looks set to be another battle between Rosberg and Hamilton for pole position, and the Brit added: “It’s very hard to overtake here.

“I saw how difficult in the last race it was to overtake so pole position for sure is important. Nico’s very quick so I’ve got to be on it.”