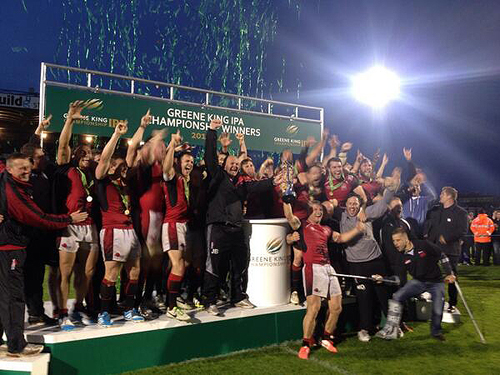 Hard yards pay off for Exiles

Former Scotland international Gordon Ross may be 36, but he has been influential in guiding London Welsh back to the Aviva Premiership, missing just one kick at goal in the two legs of the Greene King IPA Championship final. It was a stark contrast to his semi-final performance against Leeds Carnegie at the Kassam Stadium, when several kicks went wide. The Exiles may have been relegated from the Premiership at the end of the 2012/13 season, but the significant European and international experience of Ross and his goal-kicking came to the fore in blustery and wet conditions that intervened on their four knock-out matches. Defending a 19-point lead from the first leg of the final, Ross delivered a man of the match performance from outside-half with clever angled kicks behind the Bristol defence to keep Andy Robinson’s side away from the Welsh 22 as the unfancied Oxford-based club came from behind to sneak a famous 21-20 win in the last match at the Memorial Stadium. Scrum-half Chris Cook also weighed in with some well-worked box kicks and angles and that was without the kicking ability of midfield partnership Tom May and Seb Jewell which gave Justin Burnell’s side plenty of opportunities to move Bristol around the park and their forwards again put in a massive shift to keep Bristol’s attack quiet until the closing stages.

Wheels finally fall off for Bristol

Favourites to go up under former England head coach Andy Robinson, the so-called “big spenders” will have some soul searching to do in the coming weeks as the management do a ring round the dozen players who agreed to join them next season. Wales international Ryan Jones left the Ospreys early to help their play-off push, but lasted just 20 minutes of the first leg before picking up a bad ankle knock that will keep him out for four months. Eight points clear of second-placed London Welsh at the top of the table at the end of the regular season, few expected Bristol to lose one leg of the final—two was almost unthinkable with a squad, on paper, vastly superior to their opposition. Those new players expected to report for pre-season next month may now be reconsidering their positions with no Premiership rugby for at least 14 months. That wasn’t part of the script. Questions will certainly be asked about why former Wales outside-half Nicky Robinson was allowed to keep stepping up to take penalties when even the easy-looking ones were shanked as he spurned 13 points. There is a lot to be said about scoreboard pressure, as those 19 points in hand from the first leg were for Welsh, with Robinson admitting they left too much to chase down.

London Welsh and Bristol both endured a tough year, spending 51 and 54 weeks, respectively, taking part in the 2013/14 season that ended on Wednesday night. Both clubs will certainly undergo a transformation in the summer months. Burnell has admitted that Welsh will need to sign 12 to 15 players to compete in the Premiership next season but superstar names will not necessarily be on the cards despite an increased salary cap available to him, while Bristol—who have already spent much of their budget for next season attracting Ospreys outside-half Matthew Morgan, prop Jack O’Connell and winger Darren Hudson from Leinster, Harlequins hooker Max Crumpton and Samoa back-rower Jack Lam from Super Rugby side Hurricanes—must prepare for another season in an increasingly competitive Championship while moving across Bristol to groundshare with Bristol City FC at Ashton Gate. The chain of announcements of new signings seemed to suggest that Bristol assumed they would definitely go up, somewhat disrespectful and how they may be regretting that attitude now. With relegated Worcester Warriors holding on to the likes of full-back Chris Pennell, who could make his England debut against New Zealand this weekend, Bristol’s task won’t be easy as they go again in search of promotion next season with Leeds and Rotherham also expected to challenge again. For Welsh, despite the goal-kicking ability of hero Ross, age and mobility isn’t on his side and he is not likely to play 22 matches, although they have snapped up outside-half Gareth Davies from Cardiff Blues, who was runner-up in the RaboDirect Pro12’s Rhino Golden Boot stats this season with 86.96 per cent kicking accuracy with 40 successful kicks from 46 attempts. The likelihood will be that Welsh begin next season as favourites to go down, as they were two years ago, but if they can get the preparation and rebuilding sorted and get fans flocking to the Kassam, they should give Newcastle Falcons more of a scare than Worcester managed this season.