Chelsea fans grow their own patch of Stamford Bridge 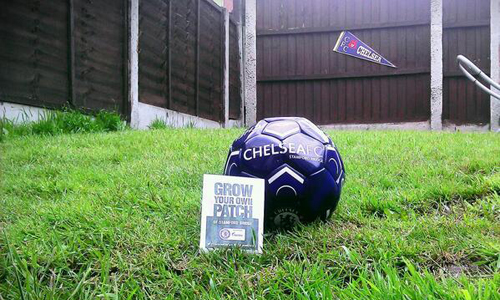 Green fingered Chelsea fans can grow their own patch of Stamford Bridge thanks to club partners Gazprom, which is giving away packets of the exact same grass seed mix that turfs the pitch of the club’s iconic west London ground.

Fans of Jose Mourinho’s side can get their hands on an exclusive packet of seed mix by tweeting pictures of how and where they would plant their seed to @GazpromChelsea, who are one of the three-time Premier League winners’s partners.

And hundreds of Blues fans have applied for a pack via Twitter and are already sharing photos of their Chelsea patches using the hashtag #MyGazpromCFCPatch, creating their own bit of Stamford Bridge in the back garden.

@GazpromChelsea All planted up with Gnome protection! Many thanks again, Graham pic.twitter.com/0bwTDN7UQp

“Whether it’s the Shed End of a garden that needs turfing, or a grey patio that needs bringing to life, this is a great opportunity for fans to grow their own patch of the Bridge and show their support for our brilliant team,” said Dmitry Amelin on behalf of the Gazprom Chelsea sponsorship.