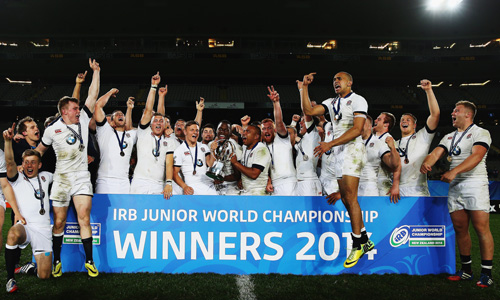 England’s tries from Saracens full-back Nathan Earle and Exeter Chiefs Joel Conlon were cancelled out by two from Bulls utility back Jesse Kriel.

Gloucester outside-half Billy Burns—younger brother of Freddie—kicked two penalties and one of two conversion attempts, with Aaron Morris landing a penalty from 55 metres which proved to be enough as player of the tournament and Baby Boks captain Handre Pollard could only manage two penalties and two conversions with two drop-goal efforts failing to land.

Nick Walshe’s side survived a mammoth barrage of attack from South Africa in the final quarter, but held firm to ensure English sport has something to celebrate from a World Cup this month.

Here is a selection of the best tweets from players past and present on another well-deserved England triumph.

We did it! Massive effort from everyone involved! World Champions. Auckland has me now! pic.twitter.com/MEdln1vSYG

Former Sale Sharks, England and British and Irish Lions full-back Jason Robinson (@Jason15Robinson) reminds us just how big England’s win is, perhaps with a nod to another World Cup taking place this month: “Congratulations to @EnglandRugby u20s on winning back to back World Cups!!!”

South African cricketer AB de Villiers (@ABdeVilliers17) is glad it’s all over: “Serious talent #BabyBoks !!! Keep pushing guys #JWC2014 … Proper fight by the English! #BabyBoks the better team but that means nothing in a Final. I’m too nervous to watch the 2nd half. #JWC2014 … Congrats England! Well fought and top tournament @handrepollard & the #BabyBoks I can finally now relax and enjoy my weekend! #weddingtime”

Bulls and Springboks number 8 Pierre Spies (@Pierrespies8) is proud of his compatriots despite the defeat: “Tough loss for #JuniorBoks but well done @handrepollard – proud of you guys!”