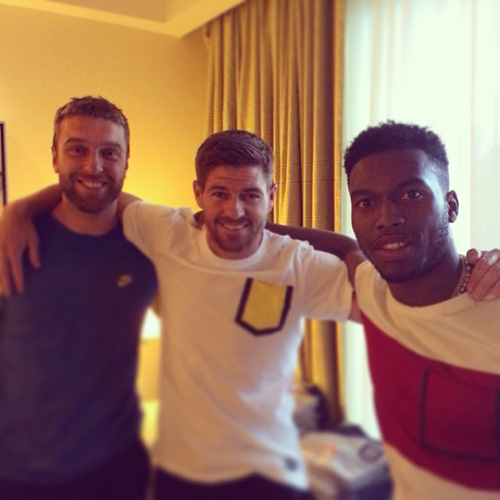 The Three Lions are teetering on the brink of elimination from the World Cup after Luis Suarez capitalised on a wayward Gerrard header and netted the winner in the 85th minute.

The Liverpool and England captain hasn’t had a great tournament by his standards. He’s not the box-to-box player he once was

The Liverpool captain lost the ball in the lead up to Suarez’s opener, too, with Wayne Rooney scoring his first World Cup goal to temporarily equalise before the Reds forward’s winner.

“There’s no way you can blame Steven Gerrard for not getting more on the ball from a header in the middle of the park for Luis Suarez’s second goal,” Scholes wrote in his Paddy Power blog.

“The defenders didn’t sense the danger. Joe Hart has looked a bit shaky too – but we don’t really have anyone to replace him.

“The Liverpool and England captain hasn’t had a great tournament by his standards. He’s not the box-to-box player he once was.

“Brendan Rodgers recognised this at Liverpool and they’ve adjusted his style of play to get the maximum from him.

“It’s not easy to keep up those high levels of performance – particularly after the season he’s had with Liverpool’s title challenge.”

“One player who should definitely start is Ross Barkley. I’ve said before that he’d be in my team but play him in the centre like he does for Everton – not out wide as a replacement for Raheem Sterling,” Scholes added.

“He’d be a direct replacement for Jordan Henderson. He’s a good lad and has done okay, but has nowhere near the quality that Ross Barkley has.

“The Everton man would be a perfect fit for that central midfield role and would take a lot of the heavy lifting off Gerrard’s shoulders.

“He can play off Gerrard, bomb forward, beat a man – give and take a pass. He’d be ideal for Wayne Rooney too and they could strike up a good partnership.”