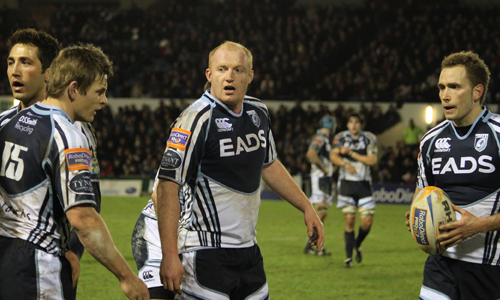 Dan Parks has called time on an “amazing journey” after confirming his retirement from rugby.

The 36-year-old former Scotland outside-half was one of eight players released by Pro12 club Connacht at the end of a disappointing season that saw the Galway-based club finish third bottom.

My highlight was being able to wear the blue of Scotland, and something I will forever treasure and hold very close to my hear

“I feel incredibly fortunate to have been able to play a sport which I love for over 11 years as a professional,” said Parks.

“My time over here in Scotland, Wales and Ireland has been the best years of my life, and I would like to thank all those who have contributed and helped me along this amazing journey.

“Of course, my highlight was being able to wear the blue of Scotland, and something I will forever treasure and hold very close to my heart.”

Born in Hornsby, New South Wales, Parks moved to the UK and had a brief spell with Leeds Tykes in 2001 before returning to Australia with Eastern Suburbs in Sydney.

In 2003, he was convinced to move to the then Celtic League strugglers Glasgow Rugby outfit—which became Glasgow Warriors in 2005—and became the first player to score 1,000 points in the competition.

His domestic endeavours saw him feature in 171 matches in the Celtic League for Glasgow Warriors, Cardiff Blues and Connacht, scoring 1,582 points with a further 661 from 63 European appearances.

Qualified to represent Scotland through his maternal grandfather, he won 67 senior caps between 2004 and 2012, amassing 266 points, including 17 drop-goals.

Having been involved with coaching Connacht’s age-grade squads during his two seasons in Galway, Parks has ambitions on giving back plenty to his sport.

“I plan to stay closely involved with the game, through TV, commercial work and coaching,” he added.

“I am really excited about the future and continuing to be involved in the sport I am so passionate about and that has given me so much.”