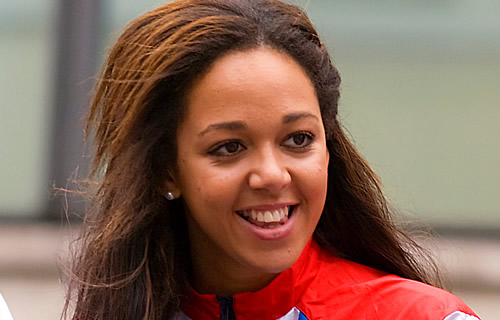 Katarina Johnson-Thompson smashed her personal best as she posted the best score in the world this year to win the heptathlon at the prestigious Hypo-Meeting in Götzis.

Johnson-Thompson, still just 21, moved to third on the all-time UK list leapfrogging Judy Simpson and Kelly Sotherton to sit behind only Olympic champions Denise Lewis and Jessica Ennis-Hill with her 6,682 points score.

She beat Canada’s Brianne Theisen-Eaton to the title, setting up what could be a mouthwatering head-to-head at this summer’s Commonwealth Games in Glasgow.

She set a 41.44 metre personal best in the javelin while British teenager Morgan Lake also broke 6,000 points for the first time, a European youth record that included personal bests in the shot, 200m and javelin.

Adam Gemili clocked 10.08 seconds to win the opening 100m at the Bedford International Games while Danny Talbot claimed the next race over the distance in 10.18 secs. And Dina Asher-Smith continued her impressive start to the season, clocking 11.21 secs to win the women’s 100m.

Laugher, 19, upgraded his recent individual bronze to take second behind China’s He Chong in the 3m event.

He also partnered with Chris Mears to collect bronze in the 3m synchro, repeating their recent result in Moscow.

Tonia Couch and Sarah Barrow followed their silver medal performance in the London leg of the competition with another second place in the women’s 10m synchro.

Barrow finished fifth in the 10m individual final while former world champion and Olympic bronze medallist Tom Daley just missed out on the medals in the men’s platform, ranking fourth.

The quartet of Andrew Triggs Hodge, George Nash, Mohamed Sbihi and Alex Gregory led from start to finish to take victory in a European best time of five minutes, 46.86 seconds.

And Olympic champion Helen Glover and world champion partner Polly Swann started their season where 2013 left off, finishing seven seconds ahead of Romania in 7:03.62.

And the British men’s eight also finished third in the final race of the regatta to ensure the GB team topped the overall medal table.

Great Britain returned from the slalom canoe European Championships without any medals – but hopes are high ahead of this week’s opening World Cup of the season at the London 2012 venue at Lee Valley.

Competing in their first international competition since becoming C2 world champions last September, David Florence and Richard Hounslow were quick in both the heats and semis but made a critical error in the final, finishing seventh.

“It was pleasing being fastest in heats and second fastest in semis and it shows that we are capable of winning a medal,” said Florence.

“The touches in the final were obviously disappointing but we are very pleased with our form and our pace this weekend and pleased to put down such a fast time.”

Fiona Pennie was looking to defend her K1 title but her final time, while the fastest down the course, was ruined by a two-second penalty, meaning she settled for fifth.
“I was fast enough for sure, it was a pity about the touch,” she said.

“But it shows I’m fast enough this week and it will be good taking that home to the World Cup race in Lee Valley. Competing on my home water, hopefully I can be impressive.”

After an early season injury, Olympic triathlon champion Alistair Brownlee insisted he was just happy to be racing after finishing fourth at the World Series race in London, one place ahead of brother Jonathan Brownlee, last year’s world silver medallist.

Jodie Stimpson dropped from first to second in the season world rankings after finishing 11th in the women’s race, as she continues her recovery from a foot injury. Former world champion Helen Jenkins was the best placed British woman in seventh.

In total five British men and four women made the top 25 – pleasing performance director Brendan Purcell, despite the lack of a podium position.

“We’ve set ourselves a standard, and other people are challenging that standard, but we still know we’re heading in the right direction,” he said.

“In a very hectic sprint race we were able to get five guys in the top twenty which I think is significant. Alistair was a lot closer, he got to within 80m and didn’t have that full on sprint, but it will come.”

England captain Kate Richardson-Walsh fumed about her team’s start to their hockey World Cup campaign in the Netherlands.

The USA went ahead through a Paige Selenski goal and a Kasey Kolojejchick effort and while Richardson-Walsh pulled one back, a 2-1 defeat to a team ranked seven places below them was frustrating.

England’s men opened their campaign with a 1-1 draw against Spain. Alastair Brogdon gave England a sixth-minute lead in The Hague but Spain equalised through Eduard Tubau.

She set a new British women’s record with a score of 1,356 beating the existing record of 1,347 shot by Alison Williamson in 2003.

Elsewhere, Geraint Thomas won the Tour of Bavaria for the second time, finishing the five stage race with a 19-second advantage over Switzerland’s Mathias Frank.