Pro12: Gregor Townsend bemoans Glasgow Warrior's lack of control after a 34-12 loss to Leinster on Sunday 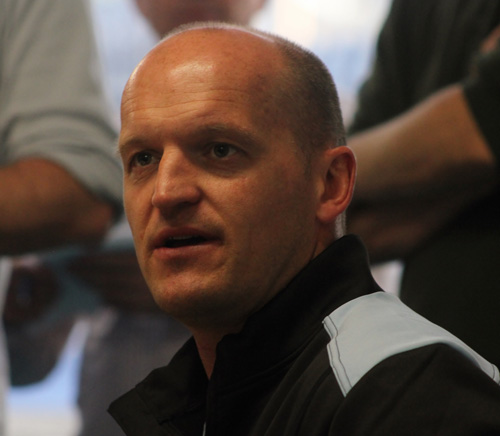 Gregor Townsend rued a lack of control and missed opportunities as Glasgow Warriors went down 34-12 to Leinster in their first Pro12 final.

The Warriors head coach admitted his side wasn’t at its best, but the result could have been different with the score at 14-12 to Leinster at the break and 20-12 in the closing stages, had they taken the chances on offer.

“The game itself I think would have been great for the neutral, but there’s times when we need to have more control and more patience in our play,” Townsend said.

“I think we rushed things at times. We knew we had to play our best game of the season to win, we didn’t do that.”

The Warriors twice led through the boot of young outside-half Finn Russell, who kicked all 12 of their points in the first half, but were unable to break through the Leinster defence and spurned half-chances when they came.

“The two occasions we got into the 22 we didn’t execute and we’ve been very good in that area—our tries here [in March] when we scored three from starting within the 22, and at Thomond Park as well,” Townsend added.

“We just rushed it and didn’t execute well and obviously [Niko Matawalu’s] try-scoring opportunity in the second half, which led to a big break away, if it’d gone our way it could have been a different game.

“There’s a lot of lessons we’ve learnt from losing a semi-final which had made us a stronger team. We’ve now got to a final. I think we have to handle the occasion better, a wonderful occasion: the noise the supporters made, the amount of Glasgow supporters who were there was fantastic.”

The Warriors’ task was made harder after losing influential flanker and breakdown menace Chris Fusaro to a head knock in the first half after a big tackle to halt a Leinster attack and lost controlling scrum-half Chris Cusiter two minutes after the break, forcing the early deployment of mercurial Fijians Leone Nakawara and Niko Matawalu.

Despite the defeat Townsend believes the Scotstoun-based club are developing something special with around 3,000 spectators flocking to Dublin to witness a first final for a professional Scottish club.

“You see it with the crowds that came today and it’s down to the way the players put in effort on the field,” he said. “[The season’s] been great. The players have worked really hard and it’s been a squad effort in the last nine games.

“That’s the 10th game now in succession, 36 players have played and they’ve played their hearts out. They threw everything at Leinster but, at times, we just didn’t have the execution that we’ve had in recent games.

“I think the element of control that’s needed, and we’ve seen in the last few games, has been missing for whatever reason. You’ve got to have patience in the opposition 22 against the best defence in the league so you’ve got to make sure you work it and work it until you get an opening. We did really well leading up to the 22 and just didn’t finish off those opportunities.”