Pro12: Jamie Heaslip speaks of his pride as Leinster become the first club to retain the title thanks to victory over Glasgow 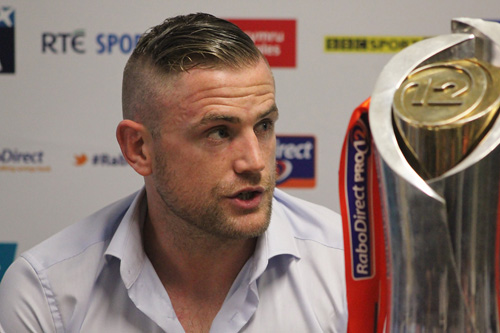 Jamie Heaslip expressed his pride for his team-mates as Leinster retained their RaboDirect Pro12 title with a win over Glasgow Warriors in front of a home crowd at the RDS on Saturday.

On an emotional day that brought the curtain down on the playing careers of Brian O’Driscoll and Leo Cullen, the province produced a squad effort to secure their fourth Celtic League trophy with a 34-12 win, but the Leinster captain believed the two tries in the final five minutes flattered them.

At times, it seemed like the Rabo was harder to win than the Heineken Cup was and shows the quality of the competition—that it’s right up there with the Champions League of rugby

“It’s great just to have that pride in lads coming on and wanting to show what that jersey’s all about,” said Heaslip. “We knew it wasn’t going to be easy and the scoreline embarrasses a little bit.

“I don’t think it reflects the game at all, doesn’t reflect the quality that Glasgow showed today, but we’re very happy with the outcome.”

Always favourites for the Pro12 title, the Leinster players have set the bar high and still the disappointment lingers at the RDS of the nature of this season’s Heineken Cup quarter-final defeat to Toulon—the example of what happens when they’re not at their best when they need to be.

But Heaslip—like head coach Matt O’Connor—praised the squad effort as they turned on the style in the final quarter to find a way to dismantle one of the league’s best defences on their way to scoring four tries and becoming the first club to retain the title.

“That was a massive challenge,” Heaslip added. “Knowing that no one has done it before and we knew hard how hard it was to win this competition and that Glasgow had a lot of momentum and they’ve got some very good quality players and pose a threat in attack all over the field.

“At times, it seemed like the Rabo was harder to win than the Heineken Cup was and shows the quality of the competition—that it’s right up there with the Champions League of rugby.

“It’s just great to have such a massive squad effort: [Brian O’Driscoll] goes off early doors, Ian Madigan comes on and slots right in, a real tight game up until that last 20 minutes—there wasn’t much between the sides—and the subs come on and make a massive impact on the game, and that’s what we look for.”

Heaslip, now 30 and not a player known for missing minutes of a game in which he plays, revealed the team were spurred on by former Leinster centre Eoin O’Malley—whose career was cut short at the start of the season with a knee problem—after the 25-year-old gave an emotional speech to the squad.

“We had Eoin O’Malley in before the game to hand out all the jerseys and I think that hit home to all the lads what playing for Leinster is all about,” Heaslip added. “We went out there and showed it today.

“It’s quite a finite thing. Your career could be over in the blink of an eye. We all know guys who’ve had to finish because of a sudden injury like that and to see someone speak quite emotionally about it meant to him playing for the club really gave a lot of guys a bit of focus on what it was about.”

As O’Driscoll managed to hide away from the post-match demands for one final interview, it was left to captain Heaslip to reflect on the season and his departing comrades.

“All of us at the end were almost too tired to celebrate,” he said. “It’s so hard, especially when Brian went off early. Even though it was out of his control we wanted to make sure his last game wasn’t in vain.

“Then Leo came on [in the second half] and he was jumping around like he was out of school, picking off those kick offs and made a massive impact on the game.

“It was a great day for the club.”