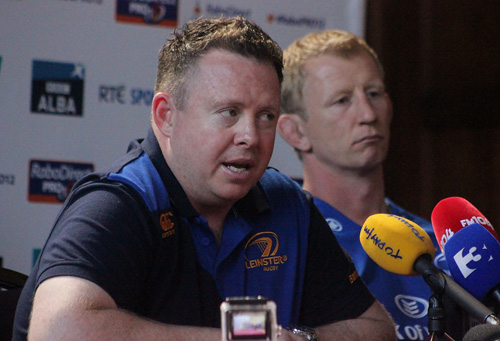 Matt O’Connor hailed a “season-best performance” as Leinster secured their fourth Pro12 title with a four-try 34-12 win over Glasgow Warriors at the RDS.

The Leinster coach, celebrating his first trophy since taking over from Joe Schmidt last summer as the club became the first to retain the title, had been in a playful mood as he swatted away questions about retiring veterans Brian O’Driscoll and Leo Cullen and is already thinking about next season.

It’s important that we get the fit right culturally. It’s a big slot. The 13 jersey has been such an iconic slot for Leinster for a long time, we need to make sure that we get that right

“As I said, it was going to take a season-best performance from us,” O’Connor said. “I thought we were clinical with the ball. We looked after it better and not to concede a try, against the threat Glasgow have on the field, is pretty pleasing, and the whole 23 were first class.

“The bench and the squad have been enormous for us all year. The performances away at Dragons in November, the performance away at Treviso during the Six Nations—that’s why we’re at home in the semi-final and final.

“That’s why you get the opportunity to do what we did and from that end everyone has contributed massively to that. It’s a great result for the whole group.”

O’Driscoll was forced off the field after just eight minutes as a calf strain cut short his final appearance for the club and O’Connor was quick to praise Ian Madigan, who again impressed in the midfield after scoring the match-winning try in the semi-final against Ulster.

“He’s a class footballer and played a hell of a lot of rugby at 12,” he said. “He gave us an extra set of hands there, created a lot of opportunities and asked a lot of questions of the Glasgow defence which was integral in the result. Never been a doubt about how good a footballer Ian Madigan is from this side of the table.

“The last two performances of the season he’s come on early and changed the game for us. That says to me that he’s in a pretty good frame of mind.

“The challenges that he’s had—he’s running the game, being the focal point of the opposition—it takes time and he will develop the more and more he does that, but him and Jimmy [Gopperth] worked in tandem brilliantly and it was a very, very pleasing result for Ian personally because he was very, very good.

“He’s certainly great value to the squad, kicks brilliant goals, he can play all across the backline and his game instincts are such that he can come on and he can fill in and do that for us.

“I wouldn’t want him to be pigeon-holed as a super sub or a replacement. I think he needs to continue to develop at the front end of the game and that’s what we’ll look to do with him next year.”

With O’Driscoll finally gone from the spotlight, O’Connor will also be tasked with finding someone to fill a sizeable hole in the Leinster—and, possibly, Ireland—midfield, but failed to say whether it would be from within Irish rugby or an overseas purchase although he conceded that he is in regular contact with the IRFU about possible signings.

“We’re looking at options all the time,” he added. “It’s important that we get the fit right culturally. It’s a big slot. The 13 jersey has been such an iconic slot for Leinster for a long time, we need to make sure that we get that right.

“I’d like to bring in five or six [players to the squad], but that’s never going to happen. I’m arguing every day with the IRFU to make sure that we’re good enough to win in Europe. That’s the reality, whether it happens or not, I don’t know.”