Pro12: Wales 7s captain Adam Thomas is relishing the chance to prove himself at Cardiff Blues 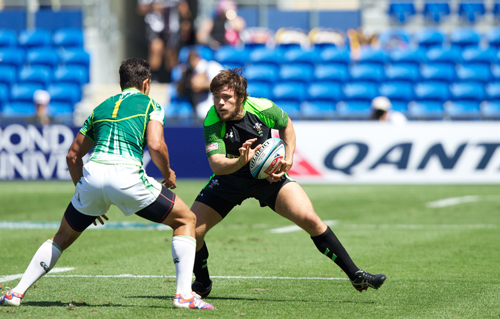 Wales 7s captain Adam Thomas has welcomed the “huge opportunity” to step up to professional rugby after joining Cardiff Blues.

The 27-year-old agreed a long-term deal at the club and will join his new team-mates at the BT Sport Cardiff Arms Park after next month’s Commonwealth Games in Glasgow.

“It’s everyone’s dream to play professional rugby and I’ve been lucky to enjoy that environment with Wales 7s,” said Thomas.

“Now I’m excited about stepping up and taking this huge opportunity at Blues and the challenges ahead of me.

“I’ve been coached by Paul John and Dale McIntosh at Pontypridd so I’m looking forward to working with them and the new director of rugby.

“I will also be linking up with players like Chris Dicomidis and Simon Humberstone, who I know from Pontypridd days, and the likes of Rhys Patchell, Owen Williams and Cory Allen, who I know from Sevens so I hope I can settle into the new set-up quickly.”

Thomas, who can play at centre or full-back, has previously been a part of the Blues U20 squad and joined Pontypridd in 2007 before linking up with the national 7s team for 24 tournaments, including last year’s Rugby Sevens World Cup in Moscow, where Wales reached the quarter-finals, but will call time on his time in the abbreviated form of the game before focusing his attention on breaking into the Blues side.

“Sevens has been a wonderful experience in my life and my last with them will be at the Commonwealth Games in July,” Thomas added.

“We had the World Cup last year and it would be great to sign off with success at a major tournament.”

Thomas also paid tribute to Pontypridd for the impact they had on his career development and laying the foundations for his chance to join the Blues.

“Pontypridd gave me an opportunity seven years ago and I wouldn’t be where I am today without them and that support.

“Everyone there is so passionate and when you talk about values I know that Ponty have helped shape the person and player I am. I can’t thank them enough.”

“Adam’s deal with the Blues highlights the relationship between the Sevens unit and the region,” said Wales 7s head coach, Gareth Williams

“Adam has been a fantastic leader and player for Wales 7s, and with this change in focus hopefully his development can continue.

“It is our goal to keep producing players of Adam’s calibre, while enhancing Wales’ performance on the World Series.”

The Blues have confirmed that Samoan centre Isaia Tuifua has left the club at the conclusion of his short-term deal which saw the 26-year-old play nine matches for the region since joining in January.