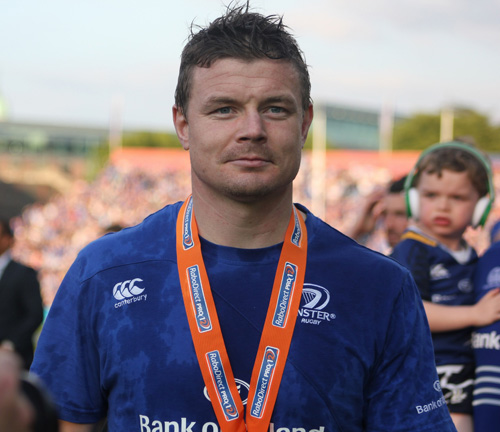 The match had been chalked up as the final swansong in Brian O’Driscoll’s memorable career, but the 19,000 strong crowd were robbed of seeing the magic from Ireland’s finest outside centre as he limped off after just eight minutes with a calf injury. It was the second time in as many matches that the 35-year-old had been forced off the field—a head knock putting an end to his semi-final appearance. Despite his loss, the expected win eventually came with two late tries to ensure O’Driscoll and fellow retiree Leo Cullen exited on another high; bright smiles all round at the conclusion as the party began. Much of the talk pre-match had been about the O’Driscoll factor on what could be another emotional farewell after Ireland’s Six Nations triumph in Paris, but one of rugby’s humble servants in the professional era has not been one for egotism and it was almost fitting that his team-mates were allowed to shine as he took a back seat on the sidelines, among them double try-scorer Zane Kirchner and forwards Sean Cronin and Devin Toner. Any talk of a transition period has been quickly played down by head coach Matt O’Connor and a beaming Jamie Heaslip, who will almost certainly take over the captaincy full-time, but the search will soon be on to find a young Irishman who can become a mainstay in the 13 jersey for Leinster and Ireland rather than the next O’Driscoll. Versatile back Ian Madigan again stepped up in the midfield in the big man’s absence, as he did in the semi-final against Ulster but his lack of size means he is not considered a long-term option at outside-centre despite finding himself second-choice outside-half behind Jimmy Gopperth. Leinster may have to go shopping this summer.

A 34-12 scoreline—the biggest winning margin in the play-off era of the Pro12—would suggest a one-sided match, but the Warriors were still in the contest until the final five minutes when their defence finally crumbled as the Leinster backs, spearheaded by lively Sprinbok Zane Kirchner, found inviting gaps. A robust defence has been at the forefront of the Warriors’ season and has been the best in the league, but the manner in which they fell away at the end was reminiscent of the second leg of this season’s 1872 Cup match as they allowed Edinburgh to go over for two late tries to secure a try-scoring bonus point. Much had been made before the contest of the nine-match winning streak put together by Gregor Townsend’s squad as they reached a final for the first time, but another defeat in Dublin sees their record move out to just one win in 20 visits to the Irish capital and their season end on a low at the iconic venue for a third successive season. Beating a club as formidable as Leinster at home is one thing, but going to their place in front of their passionate supporters needs a lift above anything else. Injuries to key personnel didn’t help their cause as flanker Chris Fusaro and hooker Dougie Hall went in the opening 30 minutes, experienced scrum-half Chris Cusiter also departing soon after the restart. Fijian livewire double act Leone Nakawara and Niko Matawalu were at the heart of some of the Warriors’ attacking opportunities, but Leinster’s defence held firm and the penalty count and handling errors were expensive to give Leinster the platform to do what they do best: seven trophies in seven seasons.

Glasgow behind provinces on talent

If there is one thing Glasgow Warriors are lacking, it’s the one or two world-class game changers in the backline that the successful teams have. A year ago, Stuart Hogg was preparing to tour with the British and Irish Lions, but questions remain over the future of the Scotland full-back after he was left out of the knockout stages with a slew of clubs interested, but even with him the Warriors don’t have enough in a relatively young backline: plenty of promise, but perhaps lacking the experience to come through the big games. With a number of players moving on this summer, the Scottish Rugby Union should come under pressure to cough up the funds to recruit big names or rising stars from the southern hemisphere, a tactic favoured by the Irish provinces and Irish Rugby Football Union which has been integral to their success: eight seasons out of 13 an Irish province has won the Pro12. Ulster’s Ruan Pienaar and Nick Williams, Leinster’s Chris Whitaker, Isa Nacewa and Felipe Contepomi and Munster’s Jean de Villiers, Doug Howlett and Casey Laulala are among the backs who have all had notable impacts at their respective adopted provinces. The results from a smattering of southern hemisphere talent with a core team of home-grown players has done wonders for the game in Ireland while Scotland have a number of talented youngsters who aren’t always getting the game time or the chance to learn from players who have developed with some of the sport’s best players. If the Warriors are to grow into a club capable of winning the title, they need to follow the same pattern or fall behind as the Irish and Welsh clubs continue to bring in overseas players.