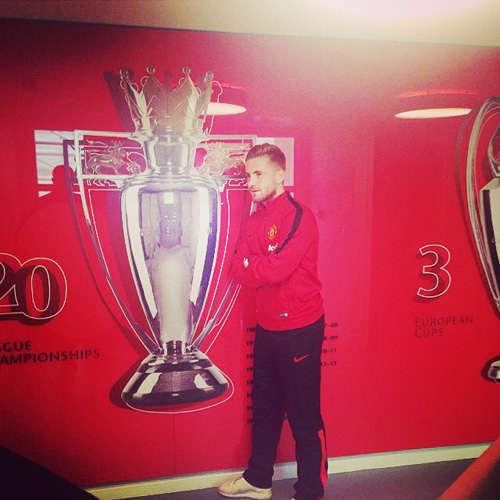 Michael Carrick and Wayne Rooney have taken to Twitter to welcome Luke Shaw to Old Trafford after the defender completed a switch from Southampton.

The 18-year-old England international signed a four-year deal with the Red Devils on Friday after completing a medical at the club’s Carrington training ground.

Here is the best of the Twitter reaction from Shaw’s new team-mates and the ex-professionals as Shaw became the world’s most expensive teenager.

The main man Shaw (@LukeShaw3) first up: “Delighted to have signed for @ManUtd ! Looking forward to the future, thank you to all the fans for your nice messages. Also a massive thank you to everyone at @SouthamptonFC including players , staff and fans. Loved every minute of my time there. And I wish you all the best in the future.”

Former Chelsea midfielder Jody Morris (@morriskid) questions the price tag: “30 million a lot for a full back?? What we thinking?!”

Red Devils midfielder Michael Carrick (@carras16) promises the new arrivals that they’ll fall in love with United: “Welcome @anderherrera8 and @LukeShaw3 …. You will love it at this great club. See you soon boys”

Former Stoke City defender Danny Higginbotham (@Higginbotham05) thinks United have done some good business: “Two great signings in two days for @ManUtd in fantastic players with youth on their side as well. Sure there will be more to come #MUFC”

Southampton legend Matt Le Tissier (@mattletiss7) is looking for positives: “@SouthamptonFC paying the price for a good season. Pillaged by the big boys but for good prices. Big pot for @Koeman1963 to work with now”