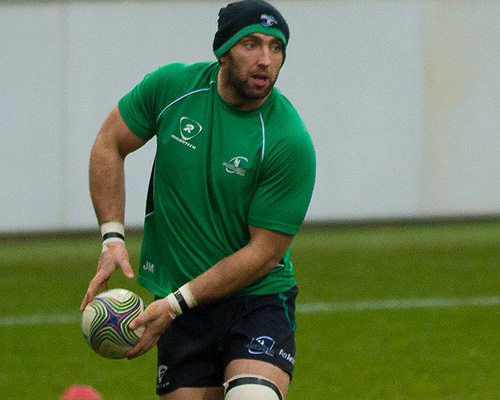 John Muldoon is looking forward to the European Rugby Challenge Cup after the draw for the pool stages lined up two French clubs as opposition.

Connacht are joined in Pool 2 by Aviva Premiership club Exeter Chiefs as well as Bayonne and newly-promoted La Rochelle from the Top 14.

And the Irish forward—who featured in Connacht’s famous 16-14 win over Toulouse in the Heineken Cup pool stags in December—has his eye on more special away days in Europe when the competition gets underway in October.

“I love the challenge of playing in France and last season we went to Toulouse and won,” Muldoon said. “That was a special day for Connacht rugby and now we have the chance to do that again.”

Changes to the organisation and qualification criteria of European rugby mean that Connacht are the only Irish province to miss out on the elite 20-club Champions Cup after finishing 10th in the Pro12, 20 points behind sixth-place Scarlets who secured the last of the Pro12 qualification places available to the Galway-based club.

But Muldoon admits it will still be a tough competition for the province despite not joining Europe’s elite on this occasion.

“After two seasons of dining out at the top table of European Cup rugby we now have to play in the Challenge Cup,” he added. “But we’ve got a tough draw and face some great games.

“We’ve been to Bayonne before and won, but we haven’t played Exeter Chiefs in a competitive game to my knowledge.

“We had a friendly against them a few seasons ago, but they have simply got better and better since they gained promotion.

“They’ve been in the Heineken Cup in the last few season and had to play against some of Europe’s biggest clubs. They will be a massive test for us.”

Rugby Champions Cup: Saracens and Tigers in ‘pool of death’