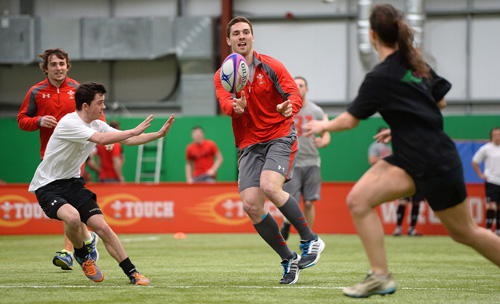 George North has won his battle with a virus to take his place in the Wales side to face South Africa in Durban on Saturday.

The Northampton Saints winger was forced to miss Tuesday’s warm-up win over the Eastern Province Kings and kept isolated from his team-mates for much of the week but was declared good to go by assistant coach Rob Howley on Thursday afternoon.

he is feeling a little rough, but he has still got time

“George trained this morning and he came through it very well,” Gatland said. “Our medical team have been taking care of him, he has been hydrated and he has had some fuel on-board.

“I am delighted to say he is raring to go even though obviously it has been a difficult and different week for him.

“Having not trained for a couple of days he is feeling a little rough, but he has still got time.”

Wales’ attack coach admitted that they will manage North’s playing time and listen to the player on how he is feeling.

“I am sure George will communicate with us in terms of how he is feeling after 50-60 minutes and we will take the decision from the player.

“The one thing in international rugby is you have to be flat-out, that is part of the intensity and the pressure and it will be even greater on Saturday.”

Howley, who was captain the only time Wales defeated South Africa in 1999, also admitted it would mean more to him if they could get a win in their two-Test series than as a player.

“It would mean everything to me if we beat South Africa,” Howley added. “Much more than as a player.

“There is a selfishness you have about professional rugby as a player but when you become a coach it’s about the team and the players in it.

“We feel we have trained very well this week. We started the tour with a win against the Eastern Province Kings on Tuesday and we are really looking forward to a great challenge.”