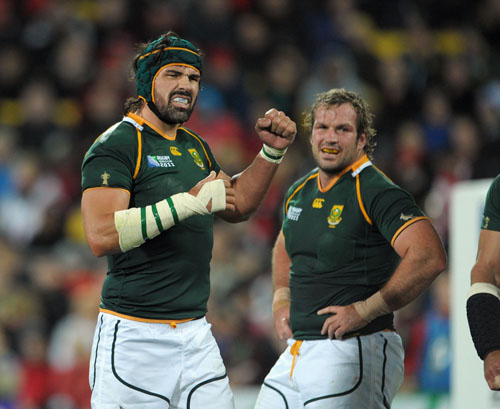 Victor Matfield will become South Africa’s most-capped Test player when he leads the Springboks against Wales in the second Test of the Castle Lager Incoming Series on Saturday.

The 37-year-old lock wins his 112th cap at the Mbombela Stadium in Nelspruit as head coach Heyneke Meyer makes two changes from the side that demolished Wales 38-16 in Durban last weekend.

Matfield retired after the 2011 Rugby World Cup becoming a commentator and coach before signing a two-year deal to make his return to the field with the Bulls at the start of the year.

“This is a fantastic accolade for Victor,” said Meyer.

“He has been a terrific servant of the game in South Africa and has led his country with distinction since returning to the Green and Gold.

“When he returned to the game earlier this season, he set his goals on becoming a Springbok yet again and he’s worked extremely hard to get there. I don’t think anyone can doubt that he deserves his place in the team and he’s also been a great interim captain, with Jean de Villiers out injured.”

Wynand Olivier is drafted in on the bench to cover midfield with Johan Goosen out injured.

“I’ve always preferred to stick with a winning combination and the changes to the team were both part of our planning,” Meyer added.

“Bakkies is fit for selection, but we decided to manage his workload this week and I know Flip, who has been outstanding in the last two seasons, will slot back in easily. The same goes for Beast, who upped the tempo with his work rate last weekend.”

South Africa ran in four tries in the first half of the first Test as Wales failed to live with the dangerous running of full-back Willie le Roux, but Meyer said expects an improved Wales to go all out for a win in their final match of the summer.

“They’ve had another week together and will be keen to lift their game on Saturday, but at the same time we were not happy with certain aspects of our game and we’ve worked hard to rectify that,” he said.

“This is their last match of the season, so we’re expecting them to come out firing. But we also want to make a step up and ensure we keep on improving as the season progresses.”