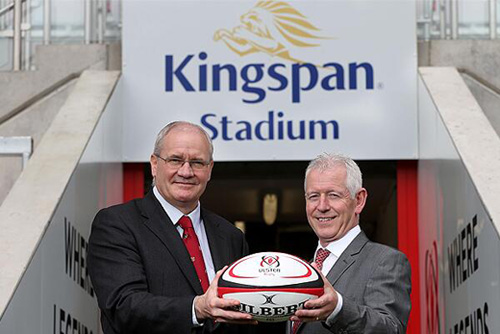 The Irish province have signed a 10-year deal with the Kingspan Group, the world’s leading provider of sustainable building materials, for the recently reopened Belfast stadium after a multi-million pound revamp which saw capacity increased to 18,000.

“We are delighted to have extended our partnership with Kingspan, one of Ulster’s most successful international companies, and to have secured a stadium naming rights partner for the first time,” said Ulster chief executive Shane Logan.

“This is a landmark deal and one that will have considerable benefits for all of rugby in Ulster.

“I want to thank Kingspan for its long-term commitment to the province and I look forward to many more special rugby occasions, from school and club finals to European match nights, at Kingspan Stadium in the future.”

Ulster are the second Irish province to sell the naming rights to their stadium after Munster agreed a deal with the Independent News and Media (INM) group to rebrand their Musgrave Park stadium and commercial HQ in Cork as Irish Independent Park for the next 10 years as it undergoes development.

Based in Co Cavan, Kingspan has been a sponsor of Ulster since 1999 and played an integral role in the recent redevelopment of the stadium with its high performance technologies.

“We are delighted to significantly extend our already strong association with Ulster Rugby by putting our name to such a wonderful sporting venue and are proud that the home of Ulster Rugby will be now known as Kingspan Stadium,” said Pat Freeman, Kingspan Environmental managing director.