Wimbledon 2014: Andy Murray opens defence of his title with victory over David Goffin after a standing ovation on Centre Court 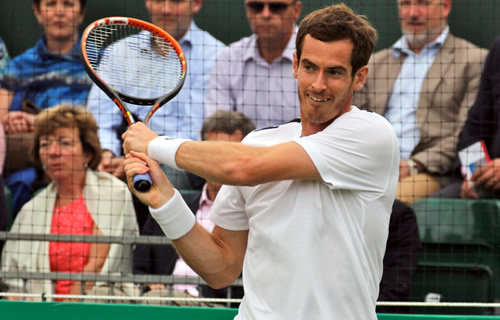 Andy Murray cruised through to round two at SW19 Photo: Marianne Bevis

And so it begins. A fortnight short of a year, Andy Murray took to Centre Court for a moment he must surely have dreamt about since he played his first match at The Championships.

For he was the first player to take to the most famous court in tennis for the 2014 edition of Wimbledon, in accordance with this august tournament’s traditions: A privilege given to the defending men’s champion, at 1pm on first Monday.

But his journey here began 10 years ago, still a slightly gangly teenager waiting to grow into his 6ft 3in frame, and even then he reached the third round. The next year, it was the fourth round. After a year without playing, he returned in 2008 to reach the quarters—and so his relentless progress towards the history books went on.

There followed three semi-finals before he at last reached the final in Olympic year, 2012. He even took the first set against the king of Centre Court, Roger Federer, but he would lose, and he would weep in disappointment. In the eyes of Wimbledon and the entire country, he was nevertheless a hero.

And it spurred him on: 2012 did prove to be his breakthrough year, for on the same famous green sward a month later, he beat the same man to win Olympic gold—and then there was no stopping him. His first Grand Slam title in New York in September was followed by the ultimate prize last year: the Wimbledon title itself.

He has yet to tire of hearing the supplementary line: the first Briton in 77 years to do so. That number became the name of his new PR agency and of the book that inevitably traced his journey.

Then something did stop him, a persistent back problem that had seen his 2013 clay campaign wrecked: He missed the French Open entirely. After a quarter-final finish at the US Open and winning two Davis Cup matches, he resorted to surgery and would not play until the start of this year.

It affected his ranking, of course: No longer in the top four, he took time to return to his best form, and also parted ways with coach Ivan Lendl. But if there was a test of his physical condition, it came at Roland Garros, on the surface he has always found the most challenging. He reached the semis, and then took on another Wimbledon champion, Amelie Mauresmo, as his coach ahead of his grass season.

He has, in truth, carried the weight of this very different kind of expectation with ease, and not a little pride. Even competing with wall-to-wall World Cup for sporting headlines, he carried it lightly—even when seats for Centre Court had been allocated in The Queue by Saturday morning.

And the standing ovation that greeted him as he walked into the sunshine was enough to create goose-bumps. There was another as he walked out for the coin toss, more as he ambled to the baseline—and he has one of the most unassuming walks in the sport—and gathered the balls to serve.

His opening game did not disappoint: A forehand winner, an overhead, a long-baseline rally and an ace to close a love hold. More cheers, naturally.

It got better, too: an immediate break, followed by a hold for 3-0.

But his opponent, the 23-year-old David Goffin, was certainly no slouch, and a better player than his current 104 ranking. He missed time at the start of the year with a groin injury, and was aiming to win just his fourth match of the season, and become the lowest ranked player ever to beat Murray in a Grand Slam.

His most memorable achievement to day was also in a Grand Slam, at the French Open, where, as a lucky loser, he reached the fourth round, losing a spirited match to Federer. And the biased Centre Court crowd at Wimbledon very quickly warmed to his all-court, nimble game. Goffin was not overawed by the venue or the occasion, and threw in plenty of net-attacking plays that made for some lively and attractive tennis.

In fact, there were several elements in his game that reflected Murray’s: lots of slice, plenty of drop-shot attempts and a couple of zipping backhand passes down the line.

But Murray was quickly on song, relishing the fresh grass and lively, warm conditions. A perfect lob on break point sealed a 5-1 lead and Murray served out the set in under half an hour, 6-1.

The second set was closer, with both producing some lovely tennis. The attack and touch of Goffin drew plenty of support from the knowledgeable crowd, and it took just one break in the third game to separate them—that and the bigger tally of errors from the young Belgian’s racket. But by the end of the 6-4 set, sealed by Murray with an ace, Goffin was the man with more winners and considerably more points won at the net. He was going to go down fighting.

And yes, the third set was the longest, fast approaching an hour in duration before Murray made the key break to avoid a tie-break at 5-5. Goffin tried to hit back with a 30-0 lead but the Murray serving, outstanding throughout the match, snuffed out the chance and Murray closed out his victory, 7-5, with a timely ace.

It was the crowd’s cue for another standing ovation—and they gave Goffin a deserved cheer as he exited Wimbledon, too. He had entertained hugely, making 22 points out of 34 races to the net and 31 winners to Murray’s 28. And he had given Murray not just the champion’s 450 match-win but a perfect warm-up for what lies ahead.

He looked very good in almost every department, and was suitably pleased with his form, telling BBC Sport: “I thought it was a very high standard match.

“I was glad to finish it in three. Sometimes you can win in three sets and not play that well, but I’m pleased with the way I struck the ball.

“I was nervous this morning and I was nervous last night, but once you sit down on the chair it’s time to get on with this year.”

Murray next plays Blaz Rola, ranked No92, who put out Pablo Andujar for the loss of just eight games.

Murray was one of five British men competing on opening day, but by the time he had finished, James Ward had gone out to No17 seed Mikhail Youzhny, 6-2, 6-2, 6-1.

Other exits on the men’s side were No18 seed Fernando Verdasco and No25 seed Andreas Seppi.