Wimbledon 2014: Novak Djokovic could face defending champion Andy Murray in semi-final after SW19 draw is made 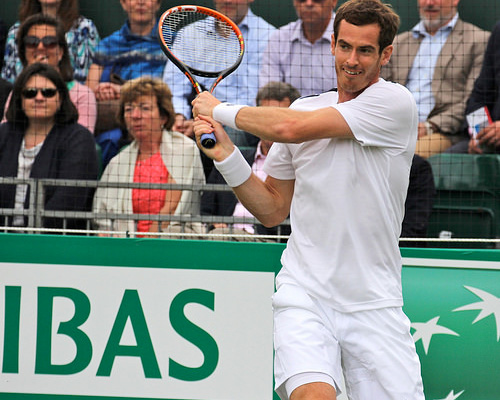 Top seed Novak Djokovic has been dealt a tricky hand if he is to equal or better his 2013 run at the All England Club.

Having contested the title against eventual champion Andy Murray last year, he is scheduled this time to face the same man in the semi-finals.

Djokovic, who has reached at least the semi-finals at Wimbledon since 2010 and was champion here in 2011, leads the head-to-head with Murray 12-8 but the Scot has won both their matches on grass, at the 2012 London Olympics, where the home favourite won gold, and in last year’s Wimbledon final.

In the bottom half of the draw, an even more compelling rivalry is set to play out if the seedings hold firm.

No2 Rafael Nadal is scheduled to meet No4 Roger Federer in what would be their first meeting on grass since their famous Wimbledon final of 2008, still regarded as one of the best matches ever played at The Championship. With nine titles and four further final appearances between them, they have dominated the men’s tournament for the last 12 years.

Djokovic opens against the No55-ranked Andrey Golubev, a talented single-hander who has been in good form this season, notably beating Stan Wawrinka in the Davis Cup, as well as winning the first set against Murray at the French Open.

Next up could be veteran Radek Stepanek, who reached the semis at Queen’s last week, beating Murray and Kevin Anderson on the way. The third round contains the young, rising talent of Vasek Pospisil, who is coming back from injury this season after a break-through run in 2013 to reach the Montreal Masters semis. Pospisil made the seedings courtesy of the late withdrawal of injured Nicolas Almagro.

No14 seed Jo-Wilfried Tsonga, twice a semi-finalist at Wimbledon, though in something of a dip in form at the moment, is lined up for the fourth round, but the quarters could throw in one of several threats.

The second seed in this segment is No6 Tomas Berdych, a finalist at Wimbledon in 2010, but alternatives are the surging Roland Garros semi-finalist Ernests Gulbis, enjoying a career-high No10, and the No23-ranked Fernando Verdasco, who took Murray to five sets at Wimbledon last year.

Also into the mix is a slight concern surrounding Djokovic’s fitness. Fears about the wrist problem that saw him withdraw from the Madrid Masters in May resurfaced when he opted not to play his scheduled exhibition match at The Boodles in Stoke Park yesterday—the venue he has chosen to sharpen his game for several years.

He is, in fact, the only player among the top dozen not to play a grass event before Wimbledon, so his decision may be telling. But assuming he is 100 percent, and that he survives several major tests along the way, he can anticipate Murray in the semis and either Nadal or Federer in the finals.

Murray, recovering from an early exit at Queen’s last week, looked much sharper on the pristine grass of Hurlingham yesterday, where he put Tommy Robredo through his paces in an exhibition match. He also looked fit, confident and happy in taking to the grass for practice with his new coach Amelie Mauresmo this morning.

Murray also plays a talented opening opponent, the 23-year-old, David Goffin, lately dropped out of the top 100 but a former No42 when just 20 years of age.

The defending champion’s first seed is scheduled to be No27 Roberto Bautista Agut, who has beaten both Berdych and del Potro in 2014, and then either the big-serving Anderson or flamboyant Fabio Fognini, who beat Murray in straight sets on clay in Davis Cup in April.

But while the Italian’s prowess on clay is renowned, he has been less successful on grass, and has only warmed up with a couple of exhibitions at The Boodles, so Anderson—who has ambitions to break the top 10 in the year ahead—is Murray’s more likely opponent.

If the draw goes according to seeding, Murray would face world No7 David Ferrer in the quarter-finals. The Spaniard has twice reached that stage before, but Wimbledon is his least successful Major, and he has been suffering from a virus since the French Open, pulling out of s’Hertogenbosch this week. He was here practising against Nadal yesterday, however.

Also here, Marcos Baghdatis and Dustin Brown clash in the first round, with the winner a possible third-round opponent for Ferrer should they overcome No25 seed Andreas Seppi in the second round.

Ferrer’s other problem is likely to be a fourth-round match against the impressive Grigor Dimitrov, seeded at his highest in a Major at No11, a former Wimbledon junior champion, and winner at Queen’s last week. That was Dimitrov’s third title of the year, and he also beat Murray in the Acapulco semis.

With a style of tennis seemingly made for grass, Dimitrov could pose the biggest threat to Murray reaching the semis. It should be said, though, that the Bulgarian has some tough floaters in is segment: first Ryan Harrison, then Luke Saville or Dominic Thiem, with Alexandr Dolgopolov his first seed.

Nadal, who was a shock first-round loser here last year and made a second-round exit in 2012, won his ninth French Open title earlier this month. It was perhaps not surprising that he lost his first grass match in Halle, just days after his Paris run, but he got in some more match time at Hurlingham with an exhibition match against Robredo.

He has a tricky—not to say familiar—draw, too. Nadal opens against Martin Klizan before a possible second-round match against Lukas Rosol—the man who beat the Spaniard in 2012.

His first scheduled seed is the huge-serving Ivo Karlovic who, when on target, can simply take the match out of his opponent’s hands.

Next up could be one of two Frenchman, the returning Richard Gasquet, who has reached the semis in Eastbourne this week, or Gael Monfils, who was outside the top 100 just over a year ago but now clear of injury, he is up to 21. Monfils won his first title in three years in Montpellier and reached the French Open quarters.

Eighth seed Milos Raonic, who achieved his first Major quarter-final at Roland Garros, is scheduled to face Nadal in the quarters, and was starting to feel at home on the grass after a couple of exhibition matches at The Boodles.

But he faces some tests before Nadal, first Matthew Ebden, then Jack Sock and, in the fourth round, dangerous grass opposition in the shape of either Kei Nishikori or Philipp Kohlschreiber.

Nishikori, even with a couple of injuries to contend with this season, has a 29-7 win-loss rate and two titles from three finals—one a Masters. He has beaten Federer, Ferrer and Raonic this year, and was leading Nadal in Madrid before his back got the better of him. If he is fit, he could be the one to watch.

Federer, who arrived here with his seventh Halle title, is boasting a bandage on his right hand after an accident with his daughters this week, but has been getting in some serious practice nevertheless: Two back-to-back sessions with compatriot Wawrinka this morning alone. Appropriate—or perhaps inappropriate—given that they are drawn against each other in the quarter-finals.

Wawrinka, ranked No3 but seeded No5 in favour of Murray, is keen to make the same impression on grass that he made on the hard courts of Australia and clay of Monte Carlo this year—and he beat Federer in the final of the latter.

But despite making a big impression here in 2009 in a five-set loss to Murray, Wawrinka has made first-round exits in three of the past four years at Wimbledon. This year, he opens against Joao Sousa—enjoying a good grass run to the semis in ‘s-Hertogenbosch—with a dangerous Dmitry Tursunov his first seeded opponent. Queen’s finalist Feliciano Lopez and ninth seed John Isner are likely fourth-round challengers.

There’s a certain familiarity about Federer’s early rounds. After Paolo Lorenzi in his opener, he could meet Julien Benneteau or Gilles Müller. Benneteau has twice beaten Federer, most recently in Rotterdam last year, and came within a hair’s breadth of putting him out of Wimbledon in the third round in 2012 in a gripping five-setter.

The Swiss, who suffered a shock second-round loss to Sergiy Stakhovsky last year, is projected to meet No30 seed Marcel Granollers—though the mature grass skills of Nicolas Mahut may get the better of the Spaniard—and then last year’s semi-finalist Jerzy Janowicz in the fourth round. An alternative to the big Pole, though, is Robredo, who beat Federer at the US Open last autumn.

There are five Britons alongside Murray in the men’s draw.

Murray and Djokovic begin their campaigns on Monday, Federer and Nadal play Tuesday.