Wimbledon 2014: Grigor Dimitrov leads the way for class of the 1990s

Wimbledon 2014: There are signs that a younger generation is starting to make its move, writes Marianne Bevis 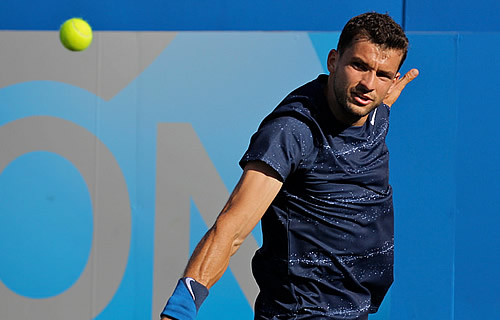 At every turn in the last couple of years, there have been men of a certain age proving that turning 30 is no barrier to tennis success.

The 32-year-old Roger Federer won his seventh Halle title last week. Feliciano Lopez, the same age, reached his first Queen’s final and defended his Eastbourne title. Lleyton Hewitt, also aged 32 and a Wimbledon champion back in 2002, is contesting his 16th Wimbledon. David Ferrer reached a career-high ranking of No3 last year and his first Grand Slam final… he, too, is 32. The list goes on.

There’s Mikhail Youzhny, seeded 17, with two titles from three finals last year. And the two Tommy’s—Haas and Robredo. The 36-year-old Haas was comeback player of 2012, eight years after winning it for the first time, while Robredo—at that magic 32—bounced back from injury to win two titles last year and break back into the top 20.

This year’s Wimbledon boasts 34 men aged 30 and over in the main draw, equalling the record which was set in 2012. The only higher number was a month ago in Roland Garros, with 38 “mature” men involved. The season has already produced eight 30+ winners, and three finals comprising entirely “the older generation”.

And the top 10 is packed with big players who are also nearing the watershed 30 and with no signs of going anywhere soon: Tomas Berdych is 28, Stan Wawrinka 29… even Rafael Nadal is 28.

But take a look at the newest player to break the top 10 and there are signs that a younger generation is starting to make its move. Milos Raonic is the first man born in the 1990s to reach these lofty heights, and he is one of a clutch of young players that has slowly but surely edged its way into contention for some of the big prizes.

For slow and sure seems to have become the new message: The day of the teenage champion in the men’s game seems a thing of the past. Indeed Nadal is the only such active player to have won a Major—the French Open at 19.

Ask today’s players why this is, and they point to the rigours of the tour, the transition to a baseline-dominated game, a slowing of the courts and improvement in the rackets, plus a professionalism in the physical and mental training regimes that now underpin this most demanding of sports.

The youngest man in the draw is Nick Kyrgios and he is already 19, a 6ft 4in powerhouse but only turned pro last year. He has some credentials on grass, too, having won the junior doubles title here. A quick look at his achievements so far this year, and the quality is already evident: Three Challenger titles, including June’s Nottingham grass event which saw his come through eight matches via qualifying.

This charismatic and exciting prospect, ranked 144, almost became a basketball pro but that would certainly have been tennis’s loss.

Then there is the 20-year-old Jiri Vesely. He is 6ft 6in, left-handed and already up at No68 ahead of Wimbledon. And he has proved to be handful even to the top men this year. Ask Andy Murray, who lost the first set to him in the third round of Indian Wells. Or Jurgen Melzer and Jeremy Chardy, his victims this spring. Vesely won six Futures and Challenger titles last year before joining the main tour on a more regular basis this year.

Not surprisingly, both these talents were awarded wild cards in the Wimbledon draw, and by chance, both have fallen in the same Richard Gasquet—Gael Monfils segment and thus could meet in the third round. The French have been warned.

There are a few more “young guns”, players from “1990s” generation, enjoying either their first Wimbledon or their first seeding here.

The 20-year-old Dominic Thiem has caught many pundits’ eyes since he made such a strong showing in Rotterdam this February. He took his very first steps on grass only this month. It’s a tough transition even for the most experienced, but his single-handed backhand, proclivity for serve and volley and a decent slice backhand, should eventually produce results.

Talking ahead of Wimbledon, he admitted: “My own expectations are not that high for Wimbledon to be honest because I need to learn a lot on grass and its not my surface at all, so that is why I am at Stoke Park to improve my game on grass and I think it’s getting better.”

In his first Wimbledon he happened to face a fellow 20-year-old, Luke Saville, a prolific winner in Futures this year but with little main-tour experience. Even so, it was he who advanced with a four-set victory, one packed with winners on both sides, but Thiem scattered the bigger number of errors.

As luck would have it, Saville moves on to play the man among the 1990s group who has really come of age in the last 12 months of his scant 23 years.

Grigor Dimitrov, right from the start, promised something special. A Junior Wimbledon champion, the youngest player in the top 20 rose to become the second of this generation to enter the top dozen, and is seeded No11 at Wimbledon after winning the prestigious grass crown at Queen’s Club. He, along with Federico Delbonis, are the only players born in the ‘90s to have won titles this year—and Dimitrov has three out of the four.

His elegant and explosive game has come on in leaps and bounds since tying up with Roger Rasheed—a hard task-master but one who has gelled with Dimitrov to take the young Bulgarian’s fitness, movement and confidence to new high.

Dimitrov’s first final came at the start of 2013, his first title toward the end, and has won three more this year. His fortunes since coming within a hair’s breadth of beating Jo-Wilfried Tsonga at the All England Club in 2011, then aged just 20, have not flourished, yet he has a game designed for grass.

In the first round, he faced qualifier Ryan Harrison, another of the young band predicted for great things. The American rose to 43 almost two years ago, but struggled with injury and consistency to slip back out of the top 100.

And their match served only to emphasis the chasm that has opened between them. Both raced through the opening set, hitting extravagantly to reach a tie-break, but Dimitrov’s maturity carried him easily to the set, 7-1. He then romped home in some style to advance, 6-3, 6-2. By the match’s conclusion the classy Bulgarian was producing beautiful tennis with almost balletic freedom.

Dimitrov will next face one of the few younger players also to make it through, Saville and, if the seedings hold firm, he could meet one of those 32-year-olds in the fourth round.

For Ferrer, a quarter-finalist at his last two Wimbledons, also advanced, beating Pablo Carrena Busta for the loss of just two games—aside from losing a mid-match tie-break!

Young and old on court on Tuesday:

Raonic and the 23-year-old tower of a player, No15 seed Jerzy Janowicz—who made his formidable mark at Wimbledon last year in reaching the semi-finals—both open their 2014 accounts;

Wimbledon 2014: I have nothing to prove, declares Venus Williams