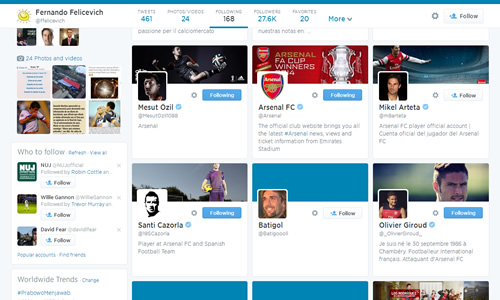 Alexis Sánchez’s agent appears to have dropped the biggest hint yet that the Chile striker is on his way to Arsenal – after he followed the club and a number of Gunners players on Twitter.

Arsenal are believed to be leading the race to sign the 25-year-old striker as Arsene Wenger looks to bolster his attacking options ahead of the new Premier League season.

Fernando Felicevich, who is Sanchez’s agent and is believed to be leading the talks surrounding his client’s future, has followed Olivier Giroud, Mesut Ozil, Mikel Arteta and Santi Cazorla on Twitter in recent days, further adding weight to the rumours that the striker is heading to Emirates Stadium.

Arsenal are reported to be ready to offer Sanchez £130,000 a week to join the north London club.

Liverpool have also been credited with an interest in the Barcelona forward, with a move to Anfield suggested as part of a possible deal involving Luis Suarez heading to Camp Nou.