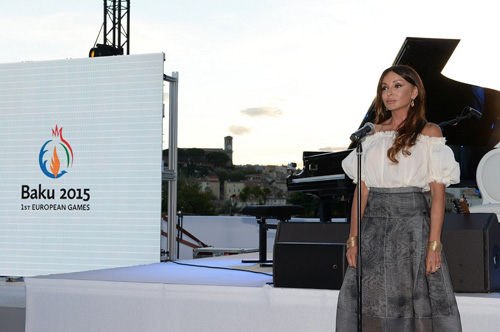 The First Lady of the Republic of Azerbaijan Mehriban Aliyeva visited Cannes this week to promote the inaugural European Games in Baku next year.

The First Lady, who was joined by Minister of Youth and Sports and Baku 2015 Chief Executive Officer Azad Rahimov, attended a public opening of a Baku 2015 European Games exhibition on Wednesday.

The Games will be of benefit to Azerbaijanis of all ages across the whole country, but particularly to the young people of our nation

Aliyeva then spoke at a formal dinner hosted by Mayor of Cannes, David Lisnard, and attended by over 300 people, including members of the European Olympic Committees, on Wednesday evening.

The three-day visit will culminate with a 10km race along the Promenade de la Croisette on Friday, after which the First Lady will present the winners of the race with their medals.

Aliyeva said: “I am delighted to represent the Republic of Azerbaijan in the magnificent city of Cannes and give an insight into the inaugural European Games which will take place in Baku next June.

“The Games will be of benefit to Azerbaijanis of all ages across the whole country, but particularly to the young people of our nation. Baku 2015 will create positive memories and excellent facilities to inspire this generation to take-up and continue to play sport throughout their lives.”

Rahimov added: “At Baku 2015 we continue to make rapid progress towards delivering the first-ever European Games and we are fully confident that we will deliver the perfect stage for athletes from across Europe to achieve their goals.

“The Games will be the largest multi-sport event in the history of Azerbaijan and we are determined to be innovative and sustainable, to try new concepts, and to deliver a first-class event.”

• Baku 2015 will be the first-ever European Games, an exciting and innovative new multi-sport event for the continent that will take place from 12 June until 28 June 2015.

• There will be a total of 19 sports at Baku 2015: 16 Olympic sports and three non-Olympic sports. More than 6,000 athletes are expected to represent their nations over the 17 days of competition.

• Baku was awarded the Games by the European Olympic Committees (EOC) in December 2012. The Baku European Games Operations Committee (BEGOC) will organise and run the Games in co-operation with the EOC.