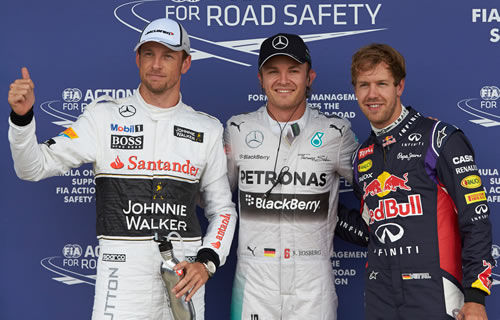 Nico Rosberg is on pole for Sunday’s British Grand Prix after his Mercedes team-mate Lewis Hamilton ended up sixth.

Hamilton was setting the pace in a rain-affected qualifying session at Silverstone but aborted his final lap and slipped down the field.

Mercedes executive director Paddy Lowe said: “He [Hamilton] felt the lap was worse and bailed out, which was unfortunate because there was a lot of time left in sector three.

“These conditions are always tricky and the first run in Q3 sector three was down because it was wet, but in the last run the final sector was quicker because it has dried quite a bit.”

After securing his fourth pole position of the season, drivers’ championship leader Nico Rosberg said: “It was definitely quite crazy – certainly in first qualifying it was and last qualifying also.

“The tyres were still drying out so we lost time on the out lap. We sat in the garage and eventually came to the conclusion that we might as well go out out and have a look.

“Then it seemed like it was worth it because the last part of the lap was very dry. It was a great team effort.”