Is this picture a clue that Alexis Sánchez is on his way to Arsenal? 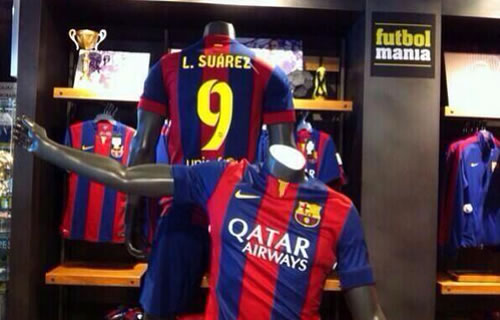 Barcelona shirts featuring the name of Luis Suarez are already on sale in Spain, prompting speculation that Alexis Sánchez is edging closer to a transfer to Arsenal.

Liverpool have been in talks with the Spanish club over a deal to sell the 27-year-old Uruguay international, with the Reds believed to be holding out for a fee of around £75m.

The Merseyside club were hoping to lure Sánchez to Anfield as part of the deal but widespread media reports this week suggest that the Chile international favours a move to Arsenal.

Now, pictures have emerged of Barcelona shirts being sold with Suarez’s name and the number nine on the back – which is currently Sánchez’s squad number at Camp Nou.

“There is nothing new to report,” said Zubizarreta.

“We will announce deals when they are done. Right now, we have two Chileans [Sánchez and Claudio Bravo] in our squad.”