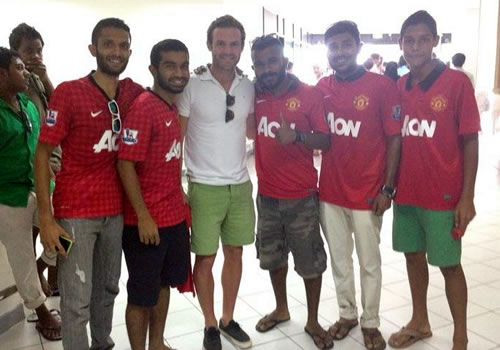 Juan Mata poses with some fans while on holiday Photo: Juan Mata/Facebook

Juan Mata is raring to go ahead of Louis van Gaal’s first season in charge at Manchester United.

The 62-year-old Dutchman is set to take over at Old Trafford this week as he aims to steer the Red Devils back into the Champions League following their seventh-place finish last term.

And Mata, who has been on holiday following Spain’s disastrous World Cup campaign, took to his Facebook page to reveal his excitement about the new campaign.

Mata, who joined the Red Devils from Chelsea in January, wrote: “About to finish my holidays and after being ‘off’ for some weeks, i can’t wait to start the new season! Regards to all!”

Manchester United kick off their Premier League campaign with a home game against Swansea City on Saturday 16 August.

Man United urged to sign these three players in the summer

Man United urged to sign these three players in the summer

Dubai 2020: Top dogs, led by No1 Djokovic and No2 Nadal, break cover as Indian Wells/Miami loom