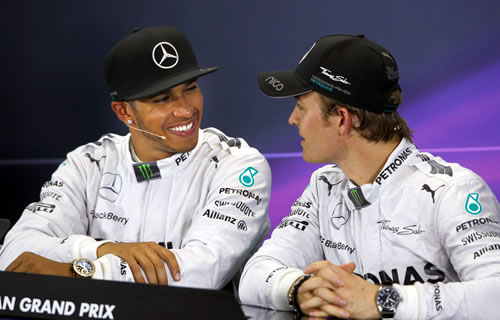 Lewis Hamilton insists he is not interested in playing any mind games with Nico Rosberg as the race for the Formula 1 drivers’ title hots up.

Hamilton closed the gap to his Mercedes team-mate to just four points with victory at the British Grand Prix earlier this month after the German was forced to retire.

The rivalry between the two Mercedes drivers has boiled over at times this season as the pair battle it out at the top of the drivers’ standings.

However, Hamilton says that he is purely focused on performing on the track ahead of this weekend’s German Grand Prix at Hockenheim.

“I would like to think it’s focused on the track,” Hamilton said how important mind games are for the championship.

“I’m not trying to play mind games with Nico, he’s a very, very intelligent driver. You talk about mind games, we’re not playing mind games but every time you go faster that has an effect on the mind.

“Inevitably you say something and people can interpret that as mind games. But this year we are fierce competitors and going to be head to head for hopefully the rest of the year so hopefully whoever can keep their head more – and most – will probably come out on top.”