Liverpool transfers: Xherdan Shaqiri says he is staying at the Bundesliga champions despite being linked to Reds 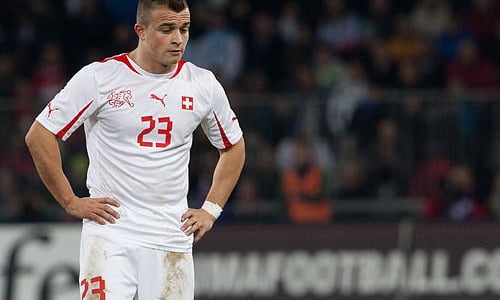 Xherdan Shaqiri has called for an end to the rumours surrounding his future, dealing Liverpool a blow in their pursuit of the Bayern Munich playmaker.

The Switzerland international has been heavily linked with a move away from Bavaria throughout most of the summer and speculation intensified after a string of impressive World Cup performances, including a hat-trick against Honduras.

Liverpool, who sanctioned the sale of Luis Suarez to Barcelona in a £75m deal this month, were reported to be chasing the attacking midfielder as Brendan Rodgers seeks to fill the void left by the Uruguay international.

However, Shaqiri, who scored six goals in 17 Bundesliga appearances for Bayern Munich last season, attempted to end the rumours and underline his desire to stay at the German champions.

“Enough with these rumours,” Shaqiri said. “I have a contract with Bayern Munich until 2016.

“My agents are in constant contact with the leaders of the club and there is no valid reason to speculate on my future.

“During this period, many things are written, but few are true.

“I am on holiday and do not speak with reporters or other clubs.”