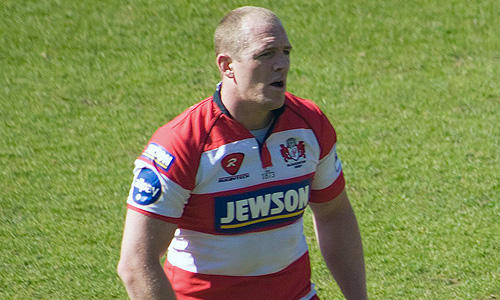 Tindall’s announcement on Tuesday morning means that he is the final member of England’s 2003 Rugby World Cup winning squad to hang up his boots.

I had to ask myself if I wanted to go and play somewhere else. Can you get emotionally attached to another club? Because that is the pull of club rugby for me

It brings to a close a magnificent playing career which encompassed 17 Premiership Rugby seasons as well as winning 75 caps for his country.

The Otley born player spent the first eight seasons of his playing career with Bath Rugby, before moving to Kingsholm ahead of the 2005-6 season.

He wore the Cherry and White of Gloucester with distinction during his time at Kingsholm and, for the past two seasons, combined playing with coaching.

Always a physical and committed player, he battled several serious injuries over the years but still made more than 200 Premiership appearances in total and 178 competitive appearances for Gloucester Rugby.

On the international scene, he would have won far more than his 75 England caps had it not been for injury. He skippered his country in the 2011 Rugby World Cup and also represented the Barbarians.

Speaking to the media, Tindall confirmed: “I could play two more years if I really wanted to but club rugby is a very special thing for me, it’s what I love about the game.

“International rugby and the Lions are great but club rugby is your bread and butter and dictates where you go in your life.

“You have to buy into that. I always wanted to be a one club man but that didn’t happen. But I was very lucky to be at two great clubs in Gloucester and Bath. And I want to thank them both for all they have done for me.

“Obviously Gloucester is closer to my heart because of the way it finished and I was here for a year longer.

“I had to ask myself if I wanted to go and play somewhere else. Can you get emotionally attached to another club? Because that is the pull of club rugby for me.

“I don’t think you can. I always say ‘never say never’ but I wouldn’t have thought I will be back.

“You have to face the big bad world sometime and now is the right time to do that.”

“Mike has enjoyed a magnificent rugby career, and been a real stalwart in recent years. He never gave anything less than 100% and his performances over the past few seasons have been real quality.

“It’s been a privilege to get to know him and work alongside him over the past couple of years, and I speak on behalf of everyone at the club when I say that I would like to wish him all the very best for the future.

“Whether he moves into coaching or pursues a career in the media, I know he will be a massive success and will always be welcome here at Kingsholm.”