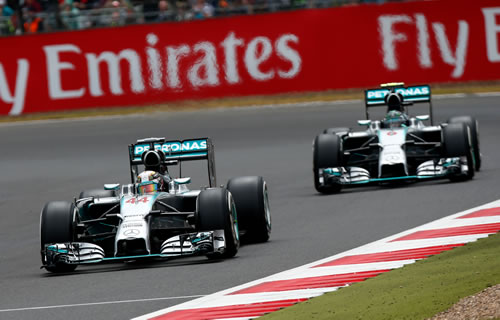 Nico Rosberg has responded to Lewis Hamilton’s latest jibe by insisting that he is “100 per cent German”.

Hamilton was asked how important it would be to win Rosberg’s home race in Germany on 20 July following his British Grand Prix triumph this weekend.

And responding with a smile, Hamilton said: “To be honest, Nico has never actually been in Germany, so it’s not really his home race.”

However, Rosberg has been quick to hit back at his Mercedes team-mate, who is four points behind him in the drivers’ standings.

Rosberg said: “Anyone can judge however they want.”

Asked whether he is as German as Hamilton is British, Rosberg added: “Not really, because I didn’t grow up in Germany, but I consider myself 100 per cent German.”

Hamilton added: “He’ll have a busier week there than I will, just like I did ahead of Silverstone. But it’s always good to beat others on their home turf, so it would be great to win in Germany.”

Mo Farah out of Glasgow Grand Prix due to illness