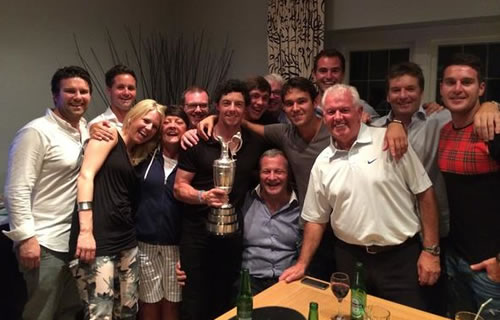 Rory McIlroy declared himself ready to “dominate” golf for years to come after his triumph at the Open Championship on Sunday.

The 25-year-old Northern Irishman won his first Open title as he finished two shots clear of the field to seal his third Major crown.

“I feel like there’s a lot more left in me,” said McIlroy. “I want be to be the guy that goes on and wins majors regularly.”

“Golf is looking for someone to put their hand up and try to dominate and I want to be that person.”

He continued: “Just to be sitting here and looking at this thing and having my name on it, it’s a great feeling.

“I’m immensely proud of myself. To sit here 25 years of age and win my third Major championship and be three-quarters of the way to the career Grand Slam, I never dreamed of being at this point in my career so quickly.

“I’ve really found my passion again for golf. Not that it ever dwindled, but it’s what I think about when I get up in the morning.

“It’s what I think about when I go to bed. I just want to be the best golfer that I can be. And I know if I can do that, then trophies like this are within my capability.”

Meanwhile, McIlroy’s father Gerry has earned £180,000 after betting that his son would win the Open Championship before the age of 26.

His father and a group of three friends are said to have placed £100 each on a 500/1 bet on McIlroy when he was still a teenager.

Following his win on Sunday, Ladbrokes tweeted: “CONGRATULATIONS RORY: We’re paying out 180k to Rory’s Dad and pals. There’ll be some party at the McIlroy’s tonight!”

Tiffany Porter lays down marker at Anniversary Games in London