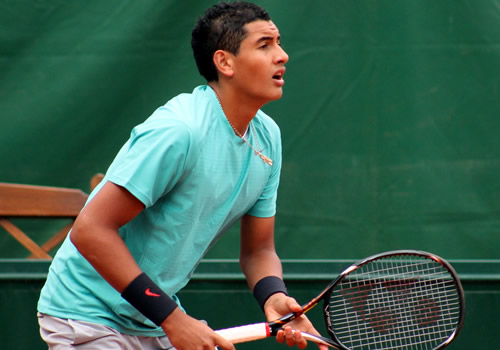 Nick Kyrgios admits that his fitness let him down during his 6-7 6-2 6-4 7-6 defeat by Milos Raonic in the Wimbledon quarter-finals.

The 19-year-old Australian conceded that his surprise fourth-round win over Rafael Nadal took a physical toll during his loss to the eighth seed on Court One on Wednesday.

“[The Nadal match] had a pretty big impact,” said Kyrgios. “I was struggling physically about halfway through the second set. I was feeling sore in a couple of places.

“I have nothing left to give. Beating Rafa took a lot out of me but I will work on my fitness and conditioning.

“But I’m not going to take any credit away from him. He served unbelievably. I thought I came out strong on his first return game. I made him earn that.

“All the other service games it looked like he was in such a rhythm that I just couldn’t do anything out there.”

Raonic, meanwhile, expressed his delight at setting up a semi-final showdown with seven-time champion Roger Federer.

“It’s a good feeling,” said Raonic. “It was a very difficult match today. A lot of not knowing what to expect because I knew I played him three weeks ago, but it was very different circumstances this time around.

“I’m happy with the result I was able to get out of it.”

Wimbledon 2014: Bouchard fairytale carries her to final against Kvitova