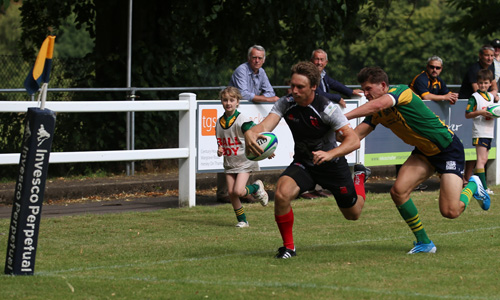 Justin Burnell was a satisfied man after seeing the Exiles kick-off their season with a 64-0 win over Henley Hawks at Dry Leas on Saturday, but is acutely aware that there are tougher tests to come.

Giving debuts to a number of the club’s summer signings, Welsh ran in ten tries and now face Wasps next Sunday at Adams Park – and head coach Burnell is encouraged by his side’s recent progress.

We’ll be putting out the best team available to us, as well as some of the boys who played today, and we’re really looking forward to the challenge [against Wasps]

“I thought it was a good blow out,” said Burnell. “Wherever you go, to score ten tries is always pleasing, but the most important factor was keeping the opposition to nil.

“It’s the start of the pre-season process, the first step on the ladder, and a bigger challenge next week in Wasps.

“To come away with minimum injuries, ten tries and a clean sheet is pleasing, but there is still a lot to work on in respect of the skill aspect. I thought we dropped too many balls and some of the passing just wasn’t accurate enough.

“When we go in to these bigger games that’s going to be the difference between winning and losing.”

Eight of those tries came in a clinical first-half display which saw Ben West and Rhys Crane both cross twice, with Adam Field, Elliot Kear, Nic Reynolds and Chris Elder all touching down.

“Rhys Crane looked really sharp and I thought James Down was man of the match today – I was really impressed with him,” added Burnell.

“As for some of the other new signings, Chris Elder looked confident and safe under the high ball and has a big physical presence, and some of those performances will now be rewarded and go in to the group to play Wasps.”

Welsh’s second half tries came from Elder and James Lewis, but the Aviva Premiership new boys certainly didn’t have it all their own way in the second half as Henley grew in to the game and asked plenty of questions of the Welsh defence.

“It was scrappy in the second half. There were a lot of changes and it took the third batch of players that bit more time to get in to it,” said Burnell.

“In games like this when you get to a 50 point margin and all everyone can see is the 100 point margin, but you‘ve got to give respect to Henley. They were outstanding; they worked hard and it was a great advert for the relationship between the two clubs.”

The Exiles now head to Adams Park next Sunday for what is sure to be a far sterner challenge.

“That will be a true indication of where we’re actually at. We’ll be putting out the best team available to us, as well as some of the boys who played today, and we’re really looking forward to the challenge,” added Burnell.