Aviva Premeirship: Chrysander Botha is relishing the chance to test himself at Exeter Chiefs this season 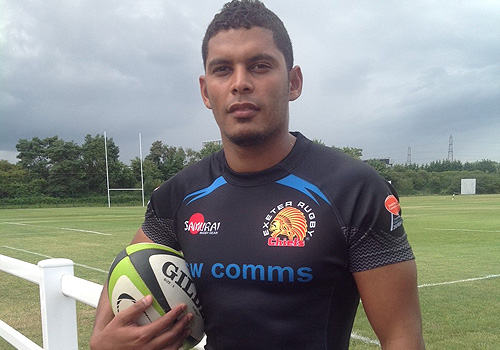 Exeter Chiefs newcomer Chrysander Botha is looking forward to the chance of testing himself both in the Aviva Premiership and European Rugby was an opportunity he simply could not turn down.

The Namibian international is just days into a two-year deal with the Chiefs, but already the 26-year-old admits he is settling in well to his new Westcountry surroundings.

It may be seen as a bit slower and a bit more tactical compared to Super Rugby, but it’s a tough competition and has some very good teams in it

Botha was head coach Rob Baxter’s eighth summer signing having just jetted in from South African Super Rugby franchise, the Lions, and will offer yet another attacking option to the Chiefs back three this term.

For Botha, however, the change of scenery is something the talented African is keen to experience and having wasted little time in getting himself acquainted with his new club and team-mates, the Wavis Bay-born back cannot wait to get started.

“I think this is a great challenge for me and one that I am very much looking forward to, especially getting out of the South African environment and into the European environment,” Botha said. “I’ve been here in Devon for a few days now and it’s a wonderful place.

“I had the chance to have a quick look at the stadium, but it’s very busy up there right now with all the redevelopment works. Also the pitch looked great, so I can’t wait to get out there and play some rugby.”

Having spent all of his playing career in South Africa, Botha says his switch to England has offered him the perfect chance to develop his game. Indeed, he highlights the displays of other African stars, such as Jacques Burger and Schalk Brits, as potential role models to follow.

“Back home the Premiership is highly-rated by a lot of people,” Botha added. “It may be seen as a bit slower and a bit more tactical compared to Super Rugby, but it’s a tough competition and has some very good teams in it.

“For me, looking at some of the African guys that have come over here, they all seem to do well and produce strong performances consistently. I guess a lot of that comes down to how well they have settled here and hopefully I can do the same because if you’re settled, then you tend to play your natural game and do well.”

Certainly the Chiefs coaching staff believe Botha’s arrival will enhance their attacking arsenal this season with assistant coach Ali Hepher insisting the Namibian will offer “something different” in terms of the back three.

He continued: “From what I have seen and heard, the Chiefs like to play a wide and attacking game, so I’m looking forward to that because a lot of my game is all about running rugby and makes me the player that I am.

“Before I arrived I looked a lot at the Chiefs and I could see they are a strong side, especially at home. Right now my aim is to work hard during pre-season, look to impress the coaches as best I can and be part of the squad going into the season.”

Botha, who has 28 international caps to his name, will get his chance to shine in the upcoming weeks as the Chiefs prepare to lock horns with Cardiff Blues, Ulster and Worcester Warriors in their three pre-season friendlies, before the season proper gets underway on September 7 with a trip to newly-promoted London Welsh.

Exeter’s new arrival insists testing himself in a new rugby environment was something he could ill afford to turn down and once he knew of the Devon club’s interest, he wanted to find out more about a possible switch.

“We were a few games into the Super Rugby season and the phone started ringing and I heard that Exeter were looking for a full-back,” he continued.

“My agent talked to me about it and I considered it straight away because I have played in every competition in South Africa and I wanted to try something different.

“I’ve no doubt I will add things to my game by coming here. Yes, it’s going to be different to what I have experienced before in my career. I know I will have to adapt to the team structure and the way they do things, but that’s exciting and it’s up to me to exploit my talents and show everyone what I can do.”