Aviva Premiership: Rob Baxter insists things are starting to "crank up" in terms of squad preparation ahead of new season 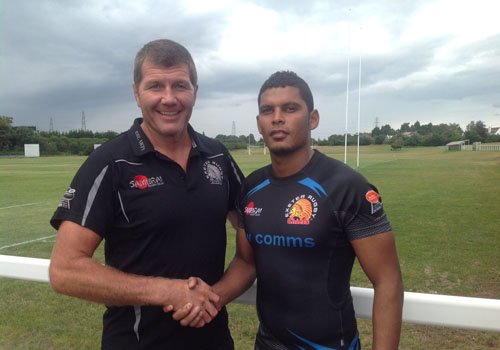 Rob Baxter insists things are starting to “crank up” in terms of Exeter Chiefs squad preparation ahead of the new 2014/15 season.

Baxter welcomed his players back into their latest phase of pre-season on Monday having giving them all a week’s rest following a physically demanding opening block of training.

Now with friendlies against Cardiff Blues, Ulster and Worcester Warriors looming large on the horizon, Exeter’s leader has been overseeing the next phase which, he says, sees a step up in standards.

“We’ve done a live bit of contact this week. Although we’ve done a bit of pad work and a bit of static contact skills in the opening block, we haven’t gone bone-on-bone before,” Baxter said.

“We also had a bit of wrestling on the beach, but we’ve stepped that up to prepare them for the full-on elements that are going to come over the next couple of weeks.

“It is starting to crank up a bit and move beyond fitness and skills and looking at patterns to seeing how things work under full contact situations.”

Having added eight new signings this summer, the latest being Namibian international Chrysander Botha who arrived this past week, Baxter says he has been encouraged by the hard work shown by all his squad since their return to duty.

“The players’ second round of testing started on Monday and they did some more on Tuesday and we saw a few PBs getting knocked off,” he added. “The guys looked fresh, fit, sharp and enthusiastic on Monday, so it was a great first day back.

“We did a bit of rugby at the end on Monday, which sometimes after a break there can be a lack of sharpness with things like handling skills, but that rustiness wasn’t there. It was pleasing to see how sharp and focused the players were.”

One man who certainly looks in fine fettle is 26-year-old Botha, who has joined the Devon club on a two-year deal from South African Super Rugby franchise, the Lions.

Keen to bolster his options in the back three, Baxter admits he likes what he sees from the African ace and believes his new recruit will certainly offer plenty to the Exeter cause this term.

“Watching the way he plays, there’s a few things that stand out,” he said. “He’s a good talker back there, he’s not a guy who just moves around and fills a role without influencing other people.

“He’s a brave defender, he’s got good footballing skills and, within a frame work where he might see more ball we might see more of him in attack than the Lions did. His all-round game at full-back looks very strong.

“He fits the right age bracket to come on a two-year contract to come and know there’s some work he can do to move him forward. He’s played a lot of Super 15 rugby, and I know Namibia might not be seen as a front-line side in international rugby but they have played some decent rugby in World Cups.

“He has performed well in those environments and that bodes well for his time in the Premiership.”

Botha’s arrival in the Westcountry is likely to be Baxter’s last foray into the market, but the Chiefs coach insists should the right player become available then the club will potentially act.

“You can look at the squad and say we could sign one or two more players, but we’d rather wait and make sure we’re 100 per cent happy with a player we go for rather than select a squad player,” added Baxter.

“There’s not anyone else in the pipeline, but we are still looking and if the right player becomes available potentially we’ll go for somebody.”