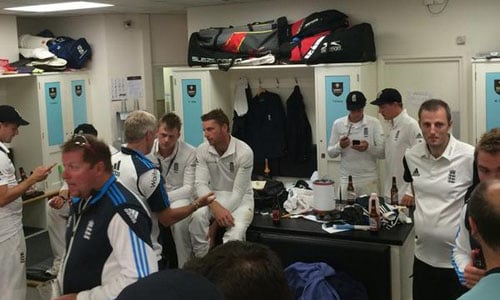 England secured an emphatic victory over India on Sunday after winning by an innings and 244 runs in the final Test at The Oval to complete a 3-1 series triumph.

Joe Root made an unbeaten 149 before James Anderson, Stuart Broad and Chris Jordan ripped through the India order to seal the win.

And here is the best of the Twitter reaction from the professionals, past and present, in chronological order on Sunday.

Ashes-winning captain Michael Vaughan (@MichaelVaughan) gives the England players some friendly advice: “Note to all England players… No dropping of your draws and watering the Oval pitch tonight please… #3-1”

Former England spinner Graeme Swann (@Swannyg66) is thrilled to see James Anderson scoop player of the series after the controversy in this series:
“What a delicious irony that @jimmy9 won player of the series. Well done to India for firing him up after Trent Bridge”

Ex-England wicketkeeper Alec Stewart (@StewieCricket) praises Cook’s men: “Brilliant comeback from England to win 3-1. Grit & determination from Cook & the players. The makings of a good team to win back the ashes. England managed to turn things around after hitting rock bottom at Lords while India owe their fans serious answers after those performances”

Ex-England head coach David ‘Bumble’ Lloyd (@BumbleCricket) higlights the sporting spirit of India: “I’m sure you all know this, but India management nominated J Anderson as Man of the Series for England …England nominated B Kumar”

England v India: It is start of a recovery, promises Alastair Cook