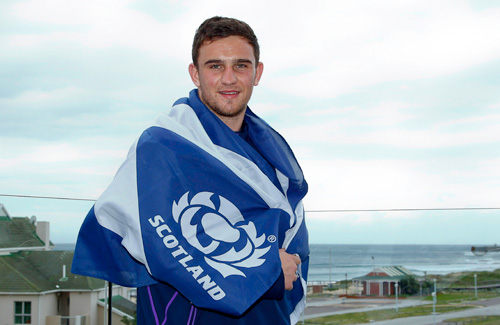 Adam Ashe has graduated from the Scottish Rugby Elite Development Programme to earn a one-year professional contract with Glasgow Warriors, keeping him at Scotstoun until at least May 2015.

The 6ft 4in No 8 has just returned home from New Zealand, where he has spent the last four months playing club rugby as part of the Macphail Scholarship.

21-year-old Ashe was called up to Scotland’s summer tour at the end of June and won his first cap, playing the full 80 minutes against South Africa in Port Elizabeth.

Ashe, who has come through the Scotland age-grade ranks, has made two appearances for the Warriors.

Adam Ashe said: “It’s been a whirlwind few months for me and I’m delighted to become a full professional with the Warriors.

“Playing club rugby in New Zealand and going over to South Africa to represent my country are two experiences I’ll never forget.

“Now I’ve got my first professional contract I want to continue to work hard and hopefully I’ll get more opportunities to play for Glasgow next season.”

Glasgow Warriors head coach Gregor Townsend said: “Adam is the latest player to come through the Elite Development Programme and undoubtedly has a bright future ahead of him.

“He is also the latest to have been awarded the Macphail Scholarship and we’ve received very positive reports about him from the coaches he’s been working with in New Zealand.

“Adam will add to our depth in the back-row next season and it’s great news for the club that he’s going to continue his development in Glasgow.”

“He has worked extremely hard and is now prepared for the transition to professional level.

“Adam has all the attributes to learn from his first Scotland cap and go on to have a very successful career.”