Guinness Pro12: The Connacht squad have taken time out of pre-season training to call up their loyal season ticket holders 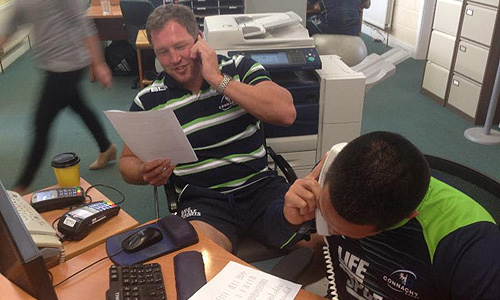 With just over two weeks to go to the official start of the 2014/15 season, anticipation and excitement is building amongst the Connacht squad and supporters.

Last night, 20 senior Connacht players took to the phones to call season ticket holders and thank them for their fantastic support ahead of the new season.

The initiative, which is in its third year, proved extremely popular with fans taking the opportunity to gain a bit of insight into pre-season training and have a chat with senior squad members.

Senior Development Executive and former Connacht captain Gavin Duffy lead the initiative this year and said: “The Phonathon was always something I enjoyed doing as a player.

“It’s great to connect with the supporters and hear their own thoughts ahead of the new season. It’s an insightful exercise and I don’t think there was one person who didn’t appreciate the call last night.

“Connacht is a special club when it comes to our relationship with our supporters and we want them to know how important they are to us. There’s a lot of excitement out there ahead of the new season in two weeks’ time and even looking at it from a different perspective now, I can’t wait to get started.”

Almost 1,000 season ticket holders were contacted last night and all were reminded of the Launch Party that is set to take place 29 August at the Sportsground.

All season ticket holders will have the chance for a behind-the-scenes look at the senior squad’s on-pitch training session which Pat Lam promises will be ‘an extremely intense hit out the week before our first game of the season’.

This will be a no-holds-barred display as players seek to claim a starting place in Connacht’s opener against Dragons.

Season Tickets for the famous Clan Terrace are almost sold out but remaining tickets can be purchased from Tickets.ie or by calling the Connacht Rugby office on 091 561 568.