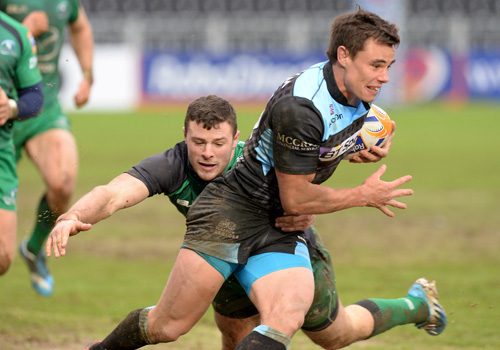 Scotland winger Lee Jones has set his sights on a starting berth in the Pro12 after agreeing a one-year deal with Glasgow Warriors.

The 26-year-old, who made six appearances for the club in the second half of last season after being parachuted in on loan from Edinburgh, will also remain available to the Scotland 7s team competing in the HSBC Sevens World Series from October.

“Playing for Glasgow Warriors and Scotland 7s is the best of both worlds for me,” said Jones.

“I’ve enjoyed life at Glasgow and managed to get a few games last season which was really enjoyable. It is a club on the up and seeing the level of support in Dublin at the Pro12 final showed that.

“I’m looking forward to hopefully being involved against Harlequins this weekend and then London Scottish next week. I want to challenge for a starting place at Glasgow.”

As well as his try-scoring prowess on the Sevens circuit, which saw him go over for seven tries at last month’s Commonwealth Games in Glasgow, Jones has also made four appearances for the senior national side.

But he will face stiff competition for a regular starting place at Scotstoun with fellow Scotland internationals Tommy Seymour, Sean Maitland and Sean Lamont among the options available to head coach Gregor Townsend.

“It’s great news for the club that Lee will be available to train and play with us next season, while also continuing his involvement with Scotland 7s,” said Townsend.

“He has really impressed since joining the club last season and this is a great opportunity for him to challenge our other wingers for a regular starting place.”

Scotland 7s head coach Calum MacRae added: “Lee made a tremendous contribution to Scotland 7s throughout the past season and was prolific at the Commonwealth Games, scoring seven tries. He has genuine match winning qualities.

“He works very hard on his game and I believe Scotland 7s can benefit from the tie-up with Glasgow Warriors as I’m sure he will thrive under the guidance of Gregor and the Warriors coaching staff.”