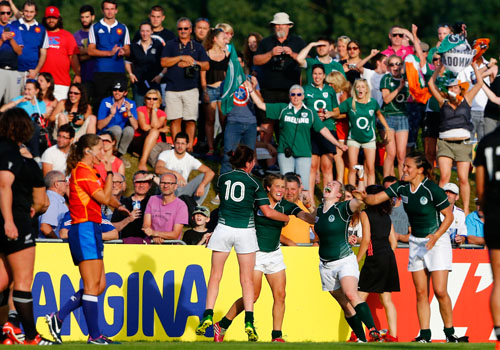 Ireland have become just the second side to beat New Zealand at the Women’s Rugby World Cup after a 17-14 victory over the defending champions.

The Black Ferns are bidding to win their fifth successive world crown but the 2013 Six Nations champions sprung a surprise to give themselves a great chance of reaching the semi-finals.

Heather O’Brien and Alison Miller scored the vital tries, whilst fly-half Niamh Briggs was accurate with the boot as Ireland beat New Zealand for the first time in men or women’s rugby.

And Irish captain Fiona Coghlan called for calm amongst her team-mates as they bid to emulate the Black Ferns and become the best side in the world.

“It’s huge (for us to beat New Zealand). As a team we respect them, we’ve watched them and we’ve probably learned a lot from them over the years,” Coghlan told IRFU’s website.

“They’re the top of the world and that’s where we said we wanted to be. We’re not there yet – this is only step two of the process but we’re on the right track.”

The Ireland skipper added: “We knew coming into this game, playing against the world champions, that it was a huge game for us. But the girls were confident, we knew we had the ability in the team and it was just (about) being consistent for the 80 minutes and we were.”