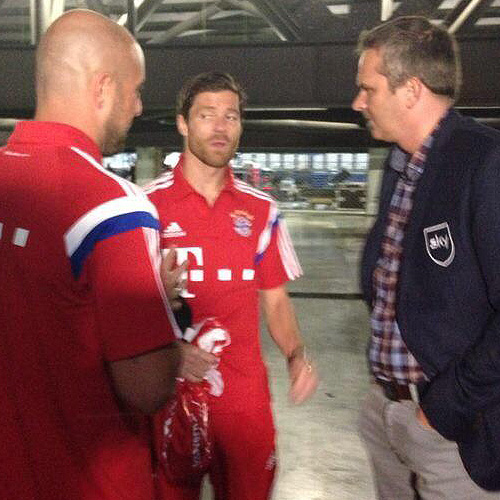 Xabi Alonso completed a move to Bayern Munich from Real Madrid on Friday, but it appears the midfielder is hanging out with familiar faces at his new club.

The 32-year-old completed a £5m move to Bundesliga champions Bayern after calling time on a decorated five-year spell with los Blancos.

Alonso, who spent five seasons at Liverpool before moving to the Spanish capital in 2009, has been reunited with former Reds goalkeeper Pepe Reina.

The shot stopper sealed a switch to the Bavarian club earlier this month after being deemed surplus to requirements at Liverpool following a year-long loan at Napoli.

And the Bayern duo bumped into former Liverpool and Munich midfielder Dietmar Hamann following their 1-1 draw with Schalke 04 on Saturday.

Alonso and Hamann were part of Liverpool’s Champions League-winning side in 2005, whilst Reina joined his two team-mates to help the Reds win the FA Cup in 2006.