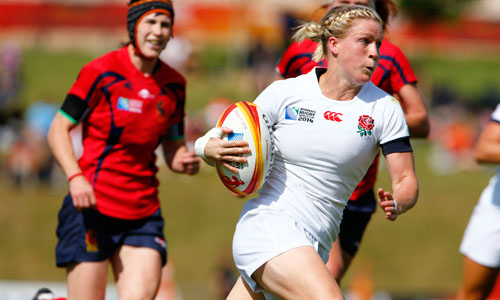 England head coach Gary Street has made two changes from the side that crushed Ireland 40-7 in the semi-finals, with Lichfield scrum-half Natasha Hunt also recalled for the clash at the Stade Jean-Bouin in Paris.

Rugby World Cup finals are obviously very special but we are genuinely just thinking about playing Canada as just another game. We have to

Packer, 24, came off the bench to score twice for England against Ireland to join Kay Wilson as the tournament’s leading try-scorer on four and is preferred to Richmond’s Alexandra Matthews, who drops to the bench.

“It was immensely tough to select this team,” Street said. “We have 26 players fit and everyone is in a really good place freshness wise so it was a very difficult call. We have had 27 players part of this World Cup experience and with one game to go it is always going to be very tough on those not selected.

“Marlie has been a great impact player this tournament. She is fresh having only played 20 minutes over the last two games so we are expecting her to add a lot of energy into our back row.

“Natasha has also had a fantastic tournament and is also fresh from the semi-final having only just come on in the second half. She adds a real pace to our game which I think is going to be hugely important.”

François Ratier’s Canada came from behind with second-half tries from Elissa Alarie and Magali Harvey to earn a thrilling 18-16 win over hosts France to book a second clash with England in eight days after their 13-13 draw in the pool phase.

“Playing Canada in the pool stages, although it was very tough, was very useful,” Street added.

“They really brought their A game to that match and we didn’t perform as we wanted to. However, the errors that we made then we have learned from and we showed that in our performance against Ireland.

“Rugby World Cup finals are obviously very special but we are genuinely just thinking about playing Canada as just another game. We have to. In 2010 we felt a real weight of expectation going into the final and we have learned a lot from that experience.”