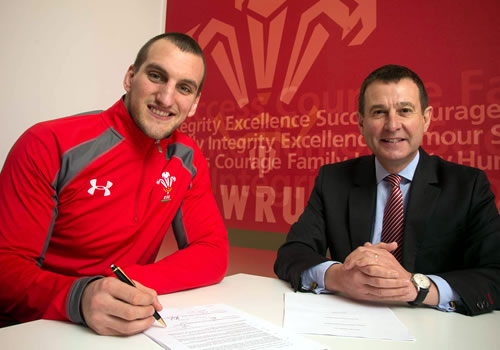 The new, radical six-year £60m Rugby Services Agreement (RSA), which comes into effect just a week before the start of the new Guinness PRO12 season, puts an end to a protracted impasse over future funding mechanisms for the four professional Welsh regions.

Under the new agreement, Wales head coach Warren Gatland will also select key players to become WRU employees to keep them in Welsh rugby alongside international captain Sam Warburton, who became the first player to sign with the union earlier this year.

Nine players from across the four regions have already been identified as likely candidates for dual contracts, including Cardiff Blues utility back Gareth Anscombe, who is expected to be a part of Gatland’s 2015 Rugby World Cup plans.

“This new agreement creates a new and positive relationship within Welsh rugby and is firmly based on the rugby priorities for Wales,” said WRU chief executive Roger Lewis.

“[It] creates a new rugby environment within which together we can nurture and develop the professional game in Wales.

“The National Dual Contracts represent a radical step forward in our mutual aim of retaining Welsh talent here in Wales […] and will help stem the flow abroad of the talent we develop here through our academies and regions.”

However, players opting to move abroad in future will become ineligible for international selection, except in extenuating circumstances at the discretion of the head coach.

The move, which has long been mooted by Gatland, protects the large contingency Wales stars already playing in England and France, with the WRU hopeful of attracting many back to the regions once Welsh rugby returns to stability.

“With greater clarity and the security of a new agreement, the regions can forward plan with more focus, working hard to ensure their independent businesses remain competitive,” said RRW chairman Nigel Short.

“Things will not change overnight, but securing our new agreement in partnership is a positive forward step.

“Clear mutual goals now form the basis of a new agreement that will create a stronger and more productive environment, where our interests are more closely aligned and a thriving domestic game that feeds into the long-term success of the Welsh international rugby.”

As well as guaranteeing funding to develop Welsh talent worth £8.7m, the agreement will see the union and regions work more closely in their approach to identifying and retaining talented players, with a further £3.6m available in loan facilities and a one-off £500,000 payment on signature of the RSA.

Within the core funding, £2m will be allocated to the dual contracts with a further £1.3m coming from the regions, while responsibility for the regional academies will transfer from the WRU to the regions with £600,000 in funding made available.

“The regions are a vitally important component of the structure of Welsh rugby and they have to be able to thrive and develop for the game in Wales to remain successful,” Lewis added.

”We now have an agreement which will ensure the pyramid structure which leads from the grassroots right through to the international team is strong and truly fit for purpose.”

Key elements of the new agreement:

• £8.7m of funding each year, with £2m allocated to dual contracts
• National Dual Contract for the first time to keep home-grown talent in Wales will be chosen by the national team head coach
• Future players moving abroad ineligible for international call-ups,
• The right for the WRU to play 13 internationals each year with a 13-day pre-series training release period
• Regional academy responsibility transferred to regions from WRU, with £600,000 funding annually
• Regional support for the Sevens game with up to three players from each region to be made available for Wales 7s selection
• Foreign players in regional squads capped at a maximum of six, with two so-called “time serving” players who will be available for Welsh selection after three years residency.
• Return of a Wales ‘A’ team with a view to playing a fixture on the weekend prior to the Six Nations

Players expected to be selected for dual contract