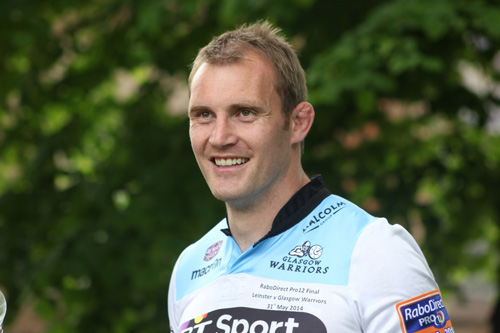 Both clubs are unbeaten after three rounds of the Guinness PRO12, and both count Leinster as an early scalp, but the Warriors are focused on fronting up to the threat that Pat Lam’s side bring.

“They have changed the way they’re playing – they’re playing a slightly different style, but I made the point out there that every game against Connacht comes down to physicality,” said Kellock.

“Out there they are generally good at the breakdown. They are doing some different things, but [winger] Tommy Seymour made the point that if they’re under pressure their basics and foundations are still the same so we can expect that and a fight.

“We’ve had a good start to the season. There’s a few guys coming in. James Downey and Adam Ashe getting their first league starts, myself coming back – I think that’s brilliant, because it freshens things up.

“That’s great because we’re at our own place, we’ll have the crowd. It’s a tough place to come and play.”

For Kellock, it is a first competitive run out in a Warriors jersey this season after undergoing shoulder surgery after the PRO12 final defeat to Leinster in May.

The 33-year-old has turned out for his BT Premiership side Glasgow Hawks and partnered Tom Ryder in the second row for Glasgow Warriors A in a convincing 30-5 win over Edinburgh A in Stirling on Monday, but is delighted to be back in the engine room for the first team.

“It’s great to be back. It’s been a different summer with having surgery straight after,” Kellock added. “The two games that I’ve had have been stepping stones and now it’s time to step back up and play as well as I can.

“I feel as if I’m playing a game for the first time. I’m really, really excited to get back out there.”

Kellock also concedes that it Connacht’s start to the season is surprising, but is far from a unique story.

“It’s slightly odd [that they’re in the top three], but credit to them,” he said. “It wasn’t that all that many years ago that people would have been saying that about us.

“I think six years ago we were second last in the league then the next year we were up there competing and we’ve been there since. They’ll be looking to go on the same journey.

“We’ve got to make sure our standards are as high as they possibly can be and we go out there and put in a good performance.”