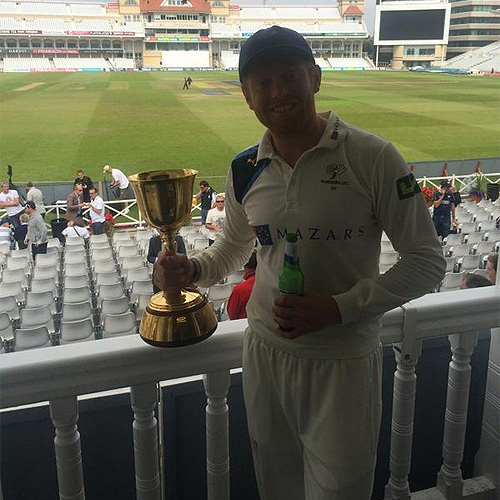 Yorkshire have ended their 13-year wait for a County Championship after a resounding innings victory against Nottinghamshire at Trent Bridge.

Entering the final day of the match, Yorkshire needed just five wickets to seal a first County Championship title since 2001, and Ryan Sidebottom who was in the squad the last time they won, produced figures of 6-30 to seal the victory.

Here is a selection of the best tweets from the professionals, past and present, to Yorkshire’s triumph.

Yorkshire wicket-keeper Jonny Bairstow (@Jbairstow21) has double the reason to celebrate, after winning the title in the 100th First-Class match of his career: “100th first class game, CHAMPIONS 2014, special day with a special club!! YORKSHIRE AND PROUD!!”

Nottinghamshire batsman James Taylor‏ (@jamstaylor20) was disappointed Yorkshire captain Andrew Gale was unable to lift the trophy after being banned for misconduct in his previous match: “Well played to Yorkshire on a great season! Well deserved! such a shame @GaleyLad wasn’t allowed to lift the trophy though!”

Alex Hales (@Alexhales1) was in agreement with his Nottinghamshire team-mate on the treatment of Gale: “Congrats to Yorkshire on the championship, proper side. Real shame Andrew Gale wasn’t allowed to lift the trophy after 6 years of captaincy”

Cricket blogger Peter Miller (‏@TheCricketGeek) believed without doubt the right team won: “Massive congratulations to Yorkshire. Far and away the best side and deserving winners”

Durham bowler Graham Onions (@BunnyOnions) was in high praise of the side who have he believes were most consistent all season: “How good have Yorkshire been this year! Some huge individual performances but overall an all round solid team, congrats and enjoy lads”

Yorkshire captain Andrew Gale (@Galeylad) did finally get his hands on the county championship trophy tweeting this pic: “Champions. #enoughsaid”

Finally, match-winner Ryan Sidebottom summed the feeling up perfectly: “Hey all! Thank you so much for your kind messages and support, absolutely amazing :) #Wow”