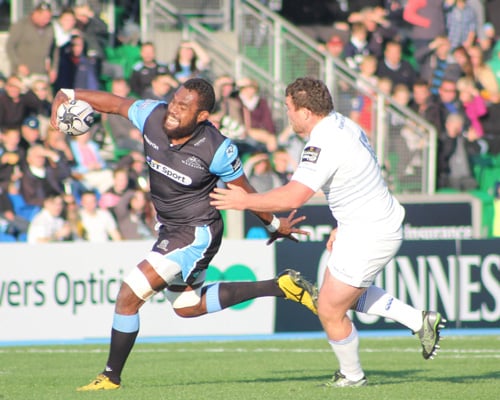 Glasgow Warriors almost threw away the chance of a second-successive home win over defending champions Leinster before a last-gasp penalty secured a famous win on the opening weekend of the Guinness PRO12.

Three first-half tries from Peter Horne, Jonny Gray and Josh Strauss saw the hosts build a 19-0 lead at Scotstoun Stadium before Leinster’s replacement forwards Jack McGrath and Tom Denton both powered over to give the Irish province a one-point lead with less than five minutes remaining.

Peter Horne, who got the first try for the Warriors, reflects on their 22-20 win.

What a game tonight scary stuff at the end.Great patience from the lads and tidy nudge from hoggy! Great start, let's be having you 2014/15!

Class watching the game in HD on @SkySportsRugby what a difference. Not sure our groundsman will appreciate it come January mind you

Warriors flanker Chris Fusaro admits they made it difficult to win after giving up a 19-3 half-time lead against the reigning champions, who were far from at their best.

Incredible performance from all involved tonight, made it difficult for ourselves in the 2nd half but good guts to get the win at the death!

Thanks again to the crowd, loud for the whole game as usual! #WarriorNation #winning

Warriors match-winning hero Stuart Hogg is already looking ahead to their next game against the Blues on Sunday after sealing the win with a penalty at the death.

We'll take the win and move onto Cardiff next week. Thanks for all the support from the #WarriorNation

Former Scarlets and Wales number 8 Scott Quinnell reflects on a brilliant day for Sky Sports’ introduction to the PRO12, which also featured Scarlets and Ulster in an eight-try 32-32 thriller.

Just heading home from Glasgow. 2 cracking games yesterday @PRO12rugby Scarlets will be gutted not to win that one Glasgow happy to hold on

No day off for Warriors head coach Gregor Townsend as he reveals how he spent his Sunday morning after the opening game of the season.

What an amazing start to the season! Just watched the game again & it much less stressful viewing second time around… Scotstoun looked great

Really enjoyed working with @SkySportsRugby this weekend two great games, lots of tries and lots of drama #Pro12onSky will be a big success