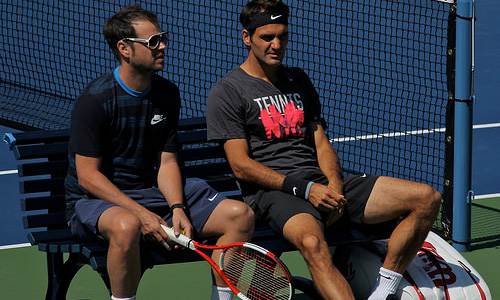 Caroline Wozniacki doesn’t appear to be a fan of playing under the Flushing Meadow lights after the Dane asked Roger Federer to seal a brisk fourth-round win ahead of her quarter-final on Tuesday.

The Dane, seeded 10th, sealed her place in the quarter-final of the year’s final Major after a thrilling 6-4, 2-6, 6-2 over Maria Sharapova in 2 hours and 37 minutes to reach her first last-eight match in two years.

24-year-old Wozniacki, who reached the US Open final in 2009 but has never won a Grand Slam crown, faces 13th Italian seed Sara Errani for a place in the semi-final last this week.

However, Wozniacki won’t take to the Arthur Ashe court until after Federer’s fourth-round match against 17th-seeded Roberto Bautista Agut of Spain, who beat Adrian Mannarino 7-5, 6-2, 6-3.

@rogerfederer please try and not play too long, I am on after you

Photo: Roger Federer asks where the 2014 US Open road will take him