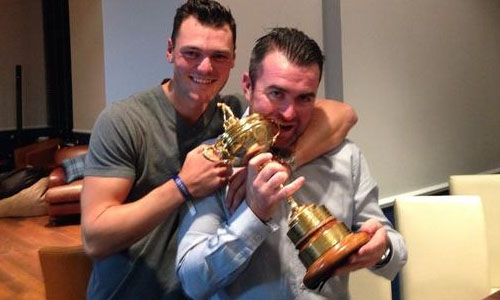 Europe completed a resounding 16 ½ – 11 ½ victory over the United States in the 40th Ryder Cup at Gleneagles on Sunday, to mark a third consecutive win for the boys in blue.

Heading into the final day needing just four points from the 12 singles matches, Paul McGinley’s charges earned six and a half points to seal their biggest win since the 18 ½ – 9 ½ rout of the American at Dublin’s K Club in 2006.

Talismanic Irish duo Graeme McDowell and Rory McIlroy got Europe up and running at the top of the singles before Welshman Jamie Donaldson sealed the victory with a win over Keegan Bradley.

Here are some of the best tweets from some of the players involved as well as celebrity fans.

World Number one Rory McIlroy (@McIlroyRory) praised the collective effort of his side as well as the effect of European skipper Paul McGinley: “That’s what I call a team effort! Everyone played their part this week, so proud to be a part of #TeamEurope. Captain McGinley = phenomenal”

German star Martin Kaymer (@MKaymer59), who sank the putt to seal the last Ryder Cup, tweeted this photo: “What a week, thanks to all the fans out there, awesome week #RyderCup2014 #europeantour #GoEurope”

Charismatic Spainard Sergio Garcia (@TheSergioGarcia) reflects on a great event while praising the European fans: “What an incredible Ryder Cup week,again. I couldn’t be prouder of my teammates and my captain.Thanks for all the support. Time to celebrate!”

Cool Swede Henrik Stenson (@HenrikStenson), whose partnership with Justin Rose over the weekend was influential to the eventual result kept it simple: “We won!”

Stenson’s partner Rose, (@JustinRose99) was pleased with his individual contribution to the team effort, earning four points from a possible five over the weekend: “What a week with @rydercupteameur So pleased to help the team with my 4 points. #teamEurope instagram.com/p/tgV7cout63/

Champion jockey AP McCoy (@AP_McCoy) took a playful jibe at the defeated American team with this comical picture: “Even I got closer to the Ryder cup than the Americans!” 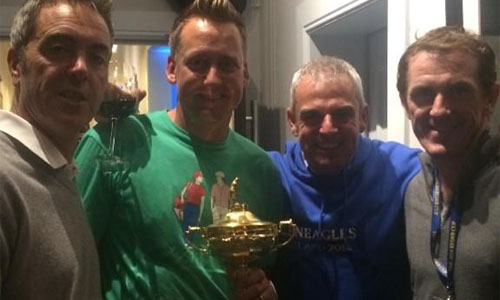 European footballing great Ruud Gullit (@GullitR) got in on the celebrations: “Yeaaaaaaaaah. We won the @rydercup again”

One Direction singer Niall Horan (@NiallOfficial) was a keen onlooker over the weekend: “Yes @rydercupEUROPE have retained the @rydercup ! Amazing ! Super golf played all weekend!”

Former Irish Rugby Union player Rory Best was in high praise of his Northern Irish compatriouts Graeme McDowell and McIlroy, as well as the finish of Welshman Jamie Donaldson: “What a shot to win the Ryder Cup!! But the come back by @Graeme_McDowell & the golf played by @McIlroyRory was outstanding!!

Aussie golf legend Greg Norman (@SharkGregNorman) praised the victorius Europeans but empathised with the defeated Americans: CONGRATULATIONS TO @rydercupEUROPE on retaining the @rydercup. @RyderCupUSA I know exactly how you feel at this moment.”

Mr Ryder Cup himself Ian Poulter (@IanJamesPoulter) suggested he and his team-mates had quite a late night celebrating their victory: “Well I think i’m looking a little worse for wears this morning. 4Am put ourselves to bed and now off to the airport”

Finally, who knew European captain Paul McGinley was a West Ham fan (@WHUFCOfficial), but whoever runs the clubs official twitter feed did: “RYDER CUP: Congratulations to Hammers fan Paul McGinley and his @rydercupEUROPE team on winning the Ryder Cup at Gleneagles! #RyderCup #COYI