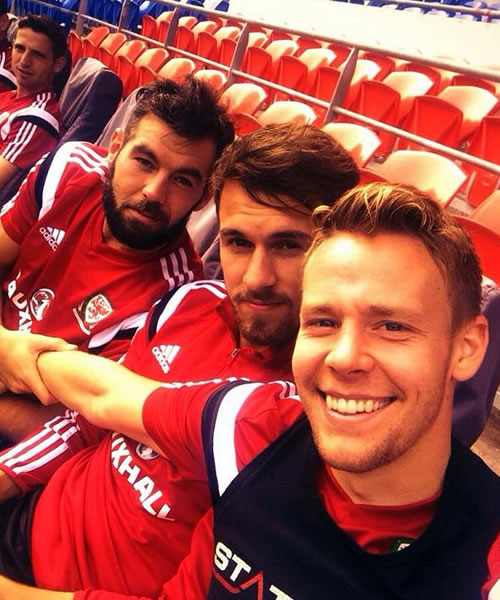 Aaron Ramsey and Chris Gunter were all smiles as they continued their preparations for Wales’ Euro 2016 clash against Andorra next week.

The Arsenal midfielder posed for a selfie along with Chris Gunter and Joe Ledley on Wednesday morning, with Liverpool midfielder Joe Allen also making a sneaky appearance in the background.

Wales kick off their Euro 2016 qualifying campaign with a trip to Andorra on Tuesday, before home games against Bosnia-Hercegovina and Cyprus in October.

Ramsey played the full 90 minutes as Arsenal were held to a battling draw by Leicester City on Sunday.

The result means that Arsene Wenger’s men have taken five points from a possible nine so far this term and the Wales midfielder was bitterly disappointed with the result.

“The overall feeling is disappointing,” said Ramsey on Sunday. “It’s difficult coming to Leicester or any other teams who are just promoted.

“They wanted to prove a point and they want to prove that they’re good enough to be here and it was difficult today.”