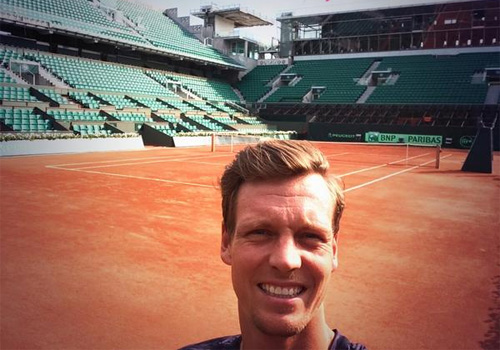 The world number seven arrived in Paris ahead of Davis Cup tie after losing to US Open finalist Marin Cilic 6-2, 6-4, 7-6 (4) in the quarter-finals at Flushing Meadows last week.

The Czech Republic are bidding to win a third successive Davis Cup title, and 28-year-old Berdych is joined by Lukas Rosol, Radek Stepanek and Jiri Vesely.

Here I am #exited pic.twitter.com/lSKkFmWqT8

Earlier this month, Czech Republic captain Jaroslav Navratil expressed his delight to have his top-ranked player Berdych available for the Davis Cup tie.

“I’m very happy that Tomas Berdych, our number one, is playing this match,” said Navratil.

“With him, we’ve got a chance of winning.

“The French team makes me scared, I have to admit it.”

US Open 2014: Serena Williams roars past Caroline Wozniacki to ‘No18 Club’